Random, insane, and easily the most active board on 4chan.

If you add up all the posts to all the other boards on 4chan, the total still falls far short of /b/'s post count. Due to the massive volume, threads are automatically deleted after just one hour (as opposed to a few days for most other boards) in order to keep /b/ at a remotely sane size. Despite this, there are usually far more posts on /b/ than anywhere else at any given time. There are "no rules" on /b/, though in practice 4chan's global rules still apply.

Advice for first-time users of /b/: look over the list of 4chan memes on this site VERY CAREFULLY, otherwise you will have no clue what's going on. Also, be prepared for anything. It is recommended to be extremely thick-skinned, and it's also highly recommended to have a very strong stomach. Or, if you wish, you may start at public toilet graffiti, and work your way up from there.

Home of the notorious breed of super-troll known as the /b/tard, /b/ is the very heart of the internet itself. Although credited as purely "Random", it is far, far more at it's deepest core.

A /b/tard is usually a member of Anonymous who frequents /b/. The name /b/tard was given due to the often accurate stereotype that user of /b/ are retards. Some people self identify as /b/tards in an attempt to take back the word from the negative into the positive.

/b/radio and /b/TV were projects of /b/, made by anonymous members of /b/. /b/radio was a shoutcast server where listeners could upload what they wanted to hear. The same people who created it also created /b/TV, which inspired /h/TV. It is recommended that Winamp is used to tune in.

Various CSS hacks by moot to alter the appearance (and sometimes functionality) of /b/, done for various reasons but usually just because he feels like it. 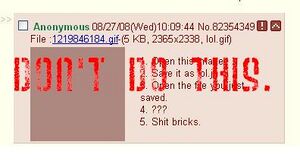 Do not do it

Before 4chan died on June 20th, 2004, moot threatened to take down /b/ first, announcing this with a thread in /b/ (no stickies back then) which simply said something along the lines of "You have two hours. Enjoy" and the subject reading "ZERO HOUR". People then started to go nuts and post like crazy which was enjoyed by all, even more so as /b/ didn't get taken down at all. To this day, "Zero Hour" strikes fear and joy in a strange mixture of excitement in the heart of all /b/tards.

The Freezing of /b/

As /b/ is a defining aspect of 4chan, most of the 4chan imitators have their own versions of /b/. None of them have achieved anywhere near the popularity of 4chan's /b/, and aside from 7chan, none of them have made any serious effort to "replace" the true /b/. In 7chan's case, a group of rebel /b/tards fled there because mods started enforcing anti-invasion rules after /i/nsurgents launched attacks on major furry sites.