Known for having marginally less trolling (or at least, less overt trolling) than most 4chan boards, but when trolls do show up they find that /m/ has virtually no mod or janitor presence. Despite its loyal membership, /m/ was largely ignored until the second round of SaiGar battles, whereby the strong presence of mecha characters in the competition brought onto /m/ the rancor of /a/. This climate of rage has largely subsided after the smooth conclusion of the tournament, but some consider the relationship between the boards strained. /m/ posters are sometimes known as /m/en, specifically /m/anly /m/en. Previously, at the height of the rivalry between /m/ and /a/, /m/ posters were known as /m/orons.

It is also the unofficial home for 4chan's Tokusatsu (Japanese Live-action superhero) fans due to similarities to it and mecha.

Anything red is usually deemed faster, because most of the mobile suits piloted by Gundam character Char Aznable (with exception of the Zeong and the Hyaku-Shiki) is usually red, and faster than (usually normal) versions. This is achieved through modification of the mobile suit though (although parts-wise they are identical to others), as it was said he fine-tuned them to such a state that no one else can handle it. In the original Gundam TV series, the Zaku that Char first appears piloting is specifically referred to as "3 times faster", though in the movie adaptation this was changed to a more plausible "1/3 faster". This meme was appropriated from 2channel, which has a Gundam board named "Char Custom" in which those who post anonymously are labeled "3 times more anonymous".

The meme saw an upsurge in prominence in 2007, when Gundam 00 revealed the "Trans-Am" mode of the main characters' mobile suits. When Trans-Am mode activates, the Gundams turn red and become 3x faster.

The initiator posts an image of someone (originally Sousuke Sagara from Full Metal Panic!) eating bread, resulting in a flood of /m/ characters screaming about how they would like some delicious BREEEEEEEEAAAAAAAAAAAAAAAAAAD.

Much like Blockamille, this is an image used to cover up genitalia or other objectionable material on /m/, a worksafe board. It is a picture of Zengar Zonbolt's mech, Daizengar, holding its incredibly huge sword (several times the size of the mech) horizontally. For obvious reasons, this picture is very useful in covering breasts and/or long penises. Oddly enough, despite the excellent censorship potential of this sword, posting a Daicensored picture will result in a temporary ban, which is even more strange, because apparently there are no janitors or mods patrolling /m/.

Given the large number of mecha shows with names beginning with G (Such as Gundam, Getter Robo, GaoGaiGar, Gurren Lagann, and Gunbuster, it is generally asserted that G is the most important letter in the /m/ alphabet, even more than the letter M itself. Oddly enough, the /g/ board on 4chan is the Technology board.

A common characteristic of the protagonists of super robot shows, being 'hot-blooded' indicates a propensity towards bravery, courage, short-temperedness, righteous anger, crying manly tears (sometimes) and lots and lots of screaming. Indeed, in many super robot shows, bravery, righteous anger, and screaming are usually all that is required to triumph over virtually any foe. Hot-bloodedness is essentially the polar opposite of emo. Hot blood is a trait highly admired by most of /m/, and the current trend toward more emo heroes in mecha anime (for which Neon Genesis Evangelion and Gundam SEED Destiny is seen as the undesirable end result) is often lamented.

A "clever" joke that gets posted occasionally in /m/. The text is accompanied by a picture of the Kaaba, Islam's holiest shrine, which is located in the center of Mecca. The joke comes from Mecca having the same pronunciation as "mecha", the subject of /m/. A variant of this joke has cropped up in /v/, using the character V from "V For Vendetta".

An old meme that comes up whenever Gundam Heavyarm Custom from Endless Waltz comes up in a thread, claiming it as being purple. It's not purple.

A nickname for the character Kira Yamato from the Gundam SEED series. In Gundam SEED Destiny, he is portrayed as a character who can do no wrong and he is always on the side of right no matter how little sense his actions or ideals make. He was also "killed" at least twice through both series and was brought back by plot shielding and was later transformed into the most powerful being in the Earth Sphere. He is roughly Superman of the Gundam SEED universe, and being like Superman, he's a total dick. His boss/pseudo-girlfriend Lacus Clyne is also referred to as "Virgin Mary 2.0". His status as the "Ultimate Coordinator" is often seen as a form of plot armor.

Kamina is one of the most manly men ever, and he has wicked shades. Thus, adding Kamina's shades to someone through judicious application of Photoshop will instantly make that person manlier. Unless it's Shinji Ikari, who's emo even then. It has yet to be tested what would happen if the glasses were applied to Saji Crossroad, who is almost as emo as Shinji but not quite.

Listen to my Song!

Can't seem to find an audience.

A phrase commonly said by Nekki Basara from Macross 7. Unusual as Basara refused to kill his enemy but rather sing in the middle of the battlefield. Later in the series, the Sound Energy is used in battle against the enemies, the Protodevilns. Also spawned /m's answer to their own nyoro~n comic strips. Besides Basara, occasionally seen with mechas and characters that have a musically theme, such as Mic Sounders the 13th from GGG, Rahxephon, Mia and Lacus from Gundam SEED, etc. 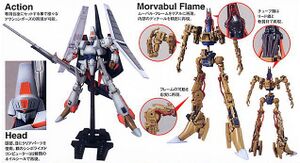 Yes, it has a Morvabul Flame.

A minor meme based on the Engrish found in the instruction manual of Bandai's "Real Robot Revolution" L-Gaim Mk-II model kit (the Japanese like to insert English text in merchandise, but rarely bother to find somebody actually fluent in English to write it). What was supposed to be "Movable Frame" (a term used in many Yoshiyuki Tomino anime to denote a mecha with an internal skeleton-like frame) was instead written as "Morvabul Flame". As this is considered to be rather high-grade Engrish, it has resulted in some /m/orons responding to threads about a mecha model kit or action figure to ask if it has a Morvabul Flame.

An original character from the Super Robot Wars series, and protagonist of the Original Generation games, which revolve entirely around characters and mechs exclusive to the SRW series. He is most known for the fact that his love for giant robots overshadows everything else in his life, particularly women (much to the chagrin of the female characters who have crushes on him). This is quite apparent when he comes into contact with giant robots that look like sexy women, such as Valsione (his reaction to which was something along the lines of, "IT'S SO CUUUUUTE!" which female characters noted was never evoked by any of them regardless of how sexy they were).

On /m/, Ryusei is a meme that comes up whenever pictures of sexually arousing female mecha are posted--for instance, upon seeing a picture of Valsione, Nobel Gundam (essentially a Sailor Moon Gundam), a female Transformer, or a shapely Orbital Frame from Zone of the Enders, Anonymous will often post a picture of Ryusei with hearts in his eyes or declare "I'm Ryusei for this mech!"

When an anime tries to explain its fictional technology using real-life scientific terms, but epically fails it by not actually having a clue what the terms in question mean, /m/ refers to it as SCIENCE. This is more or less analogous to QUALITY being used to describe bad animation. 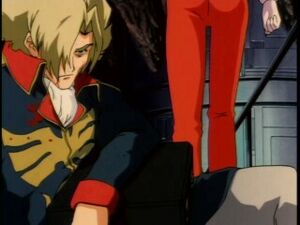 /m/'s nickname for Ghinius Sakhalin, one of the characters of Mobile Suit Gundam: The 08th MS Team. It originates from a thread started by the well-hated tripfag known A.r. !!1J3JRobqN2a (who is known for her obsession with him and constant spamming of pictures of him).

In late summer/early fall of 2006, she started a thread jokingly asking if Ghinius had AIDS (due to the fact that he has a serious, unnamed physical illness). One anonymous user coined the term "Space AIDS" to describe the disease, and since then it has evolved into a term that can refer to Ghinius's sickness, Ghinius himself (what it typically refers to), or any unnamed illness in anime. Thought by some to be to be a forced meme, though the term has appeared on other forums, some of which A.r. isn't even affiliated with.

One of the absolute most popular video game franchises on /m/. Made by Banpresto, the SRW series essentially consists of the heroes of a wide variety of mecha anime, such as Gundam, Mazinger, Dunbine, Getter Robo, etc. etc. etc. joining together to combat the forces of evil, which typically consist of the primary antagonists of the aforementioned shows. Thus, it's not particularly difficult to see why this series is so beloved on 4chan's /m/echa board. However, characters and mechs created specifically for the SRW series alone and found in no other anime, such as Ryusei and Excellen for characters and Gespenst and Grungust for mechs, have become very popular in their own right and some (particularly Ryusei) have become memes in their own right.

The Ghost of Roy Focker

Started in yet another Robotech troll thread, the ghost of Roy Focker pops in from heaven to give Hikaru some useful advice and report on what's going on up there. His friends include, but are not limited to, Gundam 0080's Bernie Wiseman, Macross Plus's Goa Bowman Guld, Stardust Memory's South Burning and Legend of Galactic Heroes' Yang Wenli.

Other ghosts arrived, including that of the Zentraedi warlord Kamjin, and Bernie himself.

A popular character from SRW, Ratsel Feinschmecker, names his mechs after his old horse, Trombe. They all follow his personal black, red, and yellow color scheme, and is usually shopped by /m/orons to other mecha linearts, making for example a Trombe Gundam, Cybuster, etc. Probably if not the most, at least second most loved paint scheme in /m/. Ratsel is also well known for his unique BGM, "Trombe!" because it overrides all other BGM (even the final boss's). Because of this, the catchphrase "Suddenly, TROMBE INTERRUPT!" was born as a combo-breaker. Finally, Ratsel has a rather odd relationship with fellow SRW pilot Zengar Zombolt, as Ratsel's mecha, the DGG-02 Aussenseiter, can transform into a horse for the Daizengar to ride upon. This obviously raises questions as to both of their sexualities, the answer to which is always "Because real men ride each other."