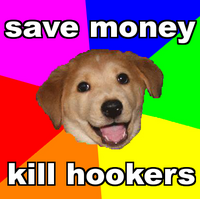 An example of the Advice Dog's twisted advice.

Advice Dog is an meme consisting of a dog's head against a psychedelic background, with text above and below it consisting of, largely, twisted advice. The Advice Dog meme spawned a number of imitators, most notably Courage Wolf.

Advice Dog was also used as bait during one of the 4chan.js attacks in 2008, which should have given the meme a longer span of popularity. However, /b/ chose to overlook the meme's involvement.

The lone positive contribution Advice Dog made was early in 2009, when Anonymous chose to fight an Advice Dog thread by reviving Blockatiel, leading to much lulz from Advice Dog detractors.