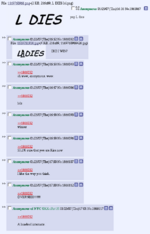 Minor (possibly forced) meme spawned by fans who felt Light's eventual comeuppance was unjust, especially at the hands of the meddling child, Nate River. There is a widespread hate for Near and the SPK, although a small but dedicated following of Nearfags who can't resist his delicious shota wiles defend him staunchly. Many fans however stayed neutral in the dispute, hating both Light and Near (the former for killing L and the latter for being such an unworthy successor). Predecessor of memes such as ROSSIU LIED, PEOPLE DIED, the rarely seen LELOUCHE WAS A DOUCHE and the more common OUGI LIED, ROLO DIED.

Refers to Light's death at the end of Death Note. Comes from a popular edit of the relevant manga pages in which Light is shown to be flailing around in a swimming pool telling the people around him how to swim (as opposed to flailing around in a pool of his own blood begging for his life). Also briefly used to refer to the possible death/defeat of Lelouch, the protagonist Code Geass:Lelouche of the Rebellion, a character who had many parallels to Light (both are geniuses who receive special powers that they use to try to change the world, it can be debated whether or not either of them are good or evil, both can be batshit insane and both are subjects of a number of yaoi doujins, etc). But in the end, unlike Light, the guy did get to pull off one last JUST AS PLANNED.