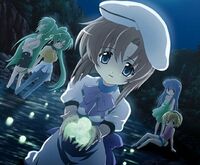 Mostly known just as Higurashi or Higgy for short, Higurashi no Naku Koro ni was originally a series of eight doujin visual novels known for their intricate plot, seemingly cutesy/harem look and torrential bloodshed. The anime is both infamous and very popular on /a/ since the bone-chilling suspense and electric surprises are packaged with piss-poor QUALITY art and animation and shitty direction/story adaption, much to the amusement of some Anonymous and frustration of others. Since the anime first aired in Spring 2006, the series has spawned an enormous number of memes. 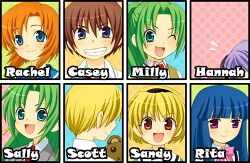 A parody fandub illustrating what would happen if 4Kids Entertainment got its hands on Higurashi. The video uses footage from episode four, starting where Keiichi is being followed by Rena up through his famous bat-bashing scene. The original scene, which depicted stalking, drugging and murder, was rewritten to be the planning of a Mexican fiesta (a jab at 4Kids' politically correct writing). Keiichi and Rena's lines are delivered in a way that sound like they were being read out of context directly from a script, and Mion's language makes heavy use of faux rapper slang (4Kids often has characters speak in slang in an effort to look "hip" to its target demographics). Sharp objects, like Rena's bilhook and Mion's "needle", were censored into a popsicle and taco, respectively, and Keiichi's murder of Mion and Rena is covered up by piñatas. All of the original, eerie music was replaced by a happy-go-lucky track (taken from Azumanga Daioh), and each of the characters was given an "Americanized" name.

/a/'s favorite phrases include: "Where did you get that popsicle?", "I'm lactose intolerant!" and "Noooo, it's got CHEESE!!". Although intended to be a parody, some posters on /a/ consider it superior to the official Higurashi dub, which was more painful to listen to than the fandub. The original movie can be seen here.

There actually is a festival in the real Higurashi, but that is a cotton drifting festival 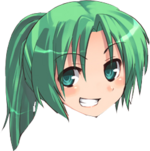 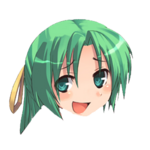 Cropped heads from a picture of Shion and Mion from Higurashi no Naku Koro Ni. They are /a/'s most popular censoring tool, in the spirit of CoverTom from /b/. Both girls are extremely popular because they can fit on almost any picture. Also come in CoverNekoArc variants, which are less well-received.

Since the characters are identical twins, Shmion is used to refer to either of the two interchangeably.

Since the plot of Higurashi by 07th Expansion involves an enlessly repeating June, it is sometimes compared to the endless Newfag Summer of 07. 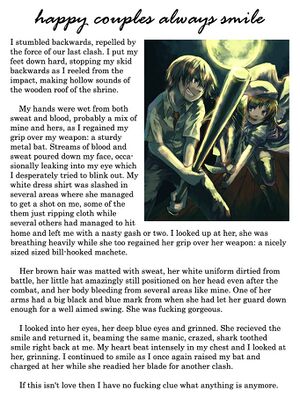 Those were the days

An old, forgotten /a/ meme that came from Higurashi fanart of Tsumihoroboshi-hen, the second "answer" arc of the game and the most loved arc of the whole series. At the conclusion of the arc, K1 and Rena had an epic night fight atop the roof of the town schoolhouse (commonly known as the Heaven or Hell fight) - most of the fanart of this duel showed K1 and Rena enjoying the heat of battle, though the fight was quite serious and the tone of the story quite dark until this point. Because K1 and Rena grew to love one another (especially in this particular arc, where Mion got shafted) Anonymous interpreted the fight as an expression of sexual intercourse, and prior to the anime's airing much interest was generated in the final fight. Because of their history of bloody murder and large body counts, the duo started to be called a "Happy Couple", because despite fighting one another their love was so intense they couldn't help but smile. 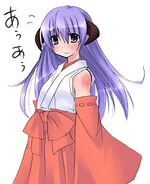 A character from Higurashi who can only be perceived by Rika Furude. As such, a relatively unfunny and forced meme has arisen in which users post pictures of Hanyuu, and engage in small shitstorms about posting blank images/backgrounds or something similar (implying Hanyuu is in the picture, but no one can see her).

The reverse version occurs when someone actually does post a totally blank picture, usually with the filename of "hanyuu"(or some variation thereof). People then start posting as if the blank images had non-worksafe pics of Hanyuu, usually replying with the promotion meme.

Both of these previous trends stopped as soon as Hanyuu became visable and tangible in the anime.

She is sometimes referred to as "Piss-tan" in an effort to troll Hanyuu fans. The origins of this name stem from a picture showing a Hanyuu look-alike peeing herself. 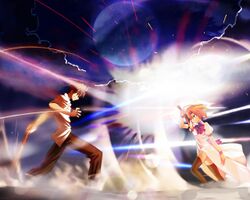 Originally not an /a/ meme but rather a line taken from the Guilty Gear series of games popular on /v/. Became associated with Higurashi in /a/ through an epic fanart drawn by Higurashi fans TYPE-MOON depicting Keiichi and Rena in their final legendary battle atop the Hinamizawa schoolhouse in the last anime arc of 2006, Tsumihoroboshi-hen. Although TYPE-MOON itself didn't fully create the artwork (Keiichi was actually a recolored Gilgamesh, and the background was done by an unknown artist), the picture became one of the most famous Higurashi images ever posted on /a/ due to the connection with the well known doujin group and single-handedly (with appropriate comments) lead to massive overhype of the final battle, which was disappointingly bad and widely considered to be an epic failure.

I wonder, I wonder.

Also known as "~kana kana!". One of Rena's adorable expressions (along with, "You gonna get taken home!"), and a way she ends some of her sentences. Gained popularity with Anonymous for all the devilish undertones it could have, coming from Rena after all (since Rena was fairly psychotic in a few of the question arcs, adding an air of malice to whatever "cute" stuff she happened to say). Later adopted by Anonymous as a way to end posts that have to point out the obvious, such as "And who was fucking responsible, I wonder I wonder".

Would you her horns?

The result of a thread on /a/ in the thick of interest as some of the later episodes of Higurashi No Naku Koro Ni Kai were airing and being subbed. In said later episodes of the series, the previously useeable, intangible (sans Rika) Hanyuu joins the main group in the physical realm, attending their school as a normal student. However, Hanyuu’s trademark horns are visible in what should be a normal human guise, with none of the characters apparently noticing or thinking anything weird of it. Thus where the meme came from.

Wondering about this, an Anon started a thread (presumably) asking why no one could see her horns. However, this post included a typo, completely leaving out the word “see”, making the post say “Why doesn’t anyone her horns?”. This was immediately jumped upon in full-force, as can be seen in the screen-cap of the thread. Thusly when referring to Hanyuu’s horns, the verb is omitted, with many Anonymous making claims of “I’d her horns”, with a number of possibilities for what verb could fill in that blank. This also led to Anons humorously quipping “Guys, you can’t just verbs out of your sentences”.

As for the original question of why no one seems to see her horns, it’s possible that Hanyuu’s horns are invisible to everyone excluding Rika and the viewer, the same way Hanyuu herself was invisible to everyone except Rika and the viewer prior to Hanyuu’s human incarnation. However, this is of no concern to Anon, who’s happy with the humor derived from this ongoing trend, like so many other memes.

Droopy-tan
Affectionate nickname for Miyo Takano, who throughout the series is drawn with droopy eyes.

Mr. Delicious
Officer Claude "Big Stone" Delicious, AKA Kurado Oishi. A fat cop with a smooth, sleepy voice from Higurashi no Naku Koro Ni who rose to notoriety after one of the manga volume covers for Higurashi circulated around /a/. Oishi's seductive pose, contrasted with his rotund gut protruding beyond his belt-buckle, was a source of many lulz among Anonymous. The nickname "Mr. Delicious" stems from his surname, 'Oishi' (which means 'big stone'), being mistaken for 'oishii' (note the additional 'i') which means 'delicious'. Enjoyed a resurgence of popularity with his character album song, which featured Oishi's voice actor Chafurin singing a surprisingly understandable yet hilarious rap with some English lyrics along with Keiichi.

Do you know Oyashiro-sama
Yes, Hinamizawa
I kill you, you kill me
No, Hinamizawa

Shmion
A collective nickname for the identical twins Shion and Mion.

Tomato Cake
aka Tomitake Jiro. Unlike Mr. Delicious, a nickname derived through a mistake, Tomitake's name actually means "Tomato Cake". Sometimes a source of jokes among Anonymous when paired with Mr. Delicious or cake memes.

One of Rika's expressions. Not related to the virus of the same name.

o hi did u order the stufd crust

One of the main heroines from the horror/suspense anime Higurashi no Naku Koro Ni which is based on a "sound novel" series of the same name. Gained popularity on /a/ and /c/ when she was revealed to be psychotic and murderous in Episode 2. Pics with Rena swinging a huge billhook became popular for a period of time, often with her signature quote "USO DA!!!" (That's a lie!!!). Also immortalized in a thread where her seeming attempts to break into the house of the protagonist with murderous intent was revealed to be nothing more than an attempt to deliver pizza. July 7th 2007 was what is known as Rena Day complete with Rena image floods. (Note: Her real name is Reina. 'Rei' is Japanese for zero and 'na' comes from 'nana' meaning seven.)