Lucky Star is the most volatile series in the history of /a/. Can best be described as a otaku moeloli anime with heavy dose of Japanese pop culture references, Kyoto Animation product placement and Haruhi viral marketing. Like Haruhi, drenched /a/ in excessive image and line spams, but on an exponentially higher (and more irritating) scale. When it first came out, half of /a/ hated it horribly and the other half loved it dearly - since then, the number of haters has increased dramatically as former fans have become "disillusioned" with the "declining" quality show, but Lucky Star nevertheless maintains a small, dedicated, and quite vocal fanbase. Both haters and fans troll each other (and themselves) with great gusto, often switching positions under the guise of Anonymous just to stir up some shitstorms. 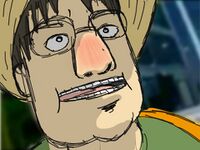 Part Lucky Star, part Ultimate Survivor Kaiji meme. Mamoru Andou is fat, stupid and traitorous character from Kaiji. He lamely attempted to backstab Itou Kaiji not once, but twice, the second time nearly succeeding and thus earning the undying hatred of all /a/. Jokes and trollings began shortly afterward by people who found Andou's cowardly antics to be lolworthy, egging people on to proclaim him cunning, ambitious, or even GAR, much to /a/'s disgust. Inevitably he was successfully nominated for SaiGar 2008, but was stomped into the ground in Round I by Furukawa Akio from Clannad.

What propelled Andou into stardom was a poorly recorded video discovered by an Anonymous on 22 November 2007 by Canadian YouTube camwhore Steve Brandon[1]. A Toys-R-Us shopping cart pusher by trade, Brandon not only sounded like and physically resembled Andou, he embodied the archetypal weeaboo; poor, unsightly, ronery, and rooming in his mother's basement. Brandon also had the stereotypically creepy obsession with moe, as evidenced by photos on his blog of him fondling imported Haruhi plushies, wearing tight Sailor Moon shirts and a horrifying admission of having purchased the deluxe version of Haruhi volume three[2]. The nail in the coffin for many Anonymous was Brandon's claim to be a 32-year old computer animation student (i.e., for anime), which was posted over four years ago in 2004[3].

The video in subject features an on-duty, straw hat wearing Brandon chortling (to many unsurprisingly) the opening of Lucky Star, "Mottete Salor Fuku". He sung it exceptionally badly, stumbling over nearly all the words and resorting to mumbling when the lyrics were too quick for him to mouth or too jumbled for him to remember. Even more hilariously, he'd always substitute an English word for a Japanese one that sounded vaguely similar to an Englilsh one (most notoriously, "let's get cherry pie"). Anonymous derived "epic lulz" (no exaggeration) from the video - it combined some of the most hated icons of /a/ into a minute and a half of utterly abysmal failure.

Brandon - now affectionally nicknamed Andou - at first seemed surprised by the popularity of his video and defended it publically, but was quick to make it private when he learned his "fans" were from 4chan from the offensive YouTube comments. This act annoyed many Anonymous, but a few lucky ones were able to gain his trust to obtain access into his private video stash, whereby they stole a downloadable copy of the Lucky Star song and made troll uploads, which were subsequently deleted by YouTube administrators. Eventually, a remix was uploaded to MoonTube, putting it beyond the reach of the copyright fags of America. This remix, which featured Andou's singing properly timed to the actual background music of "Mottete Sailor Fuku" while accompanied by visuals, proved outrageously popular with Anonymous, and exploiting Andou became a subject of mass obsession far beyond his initial discovery[4]. 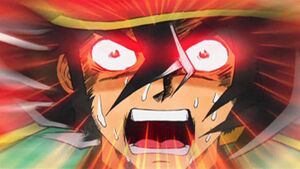 THIS WILL NOT BE TOLERATED!!!!

The hot-blooded shop cashier where Konata goes to buy DVDs. With a resemblance to Domon from G Gundam and his shop assistance operations, he is one of the redeeming features of the show and makes the scene automatically WIN with his presence. He is actually the mascot of a real chain of anime goods stores in Japan, AniMate.

Nickname for Izumi Soujirou, the father of Konata. A middle-aged man with an 18-year-old loli daughter and an interest in the otaku culture, he is what all /a/ssholes wish to be. In addition to this, he has also married a (deceased) loli wife, has a police officer cousin, has a 14-year-old loli niece, and has Konata's loli-looking friends coming over every so often. He truly wins at life.

When the first episode of Lucky Star aired back in April, these were the first (interpretation of the) words Anonymous heard when the opening theme (Take It! Sailor Uniform) started. It spawned several really bad West-side fanart, "is this a sausage anime?" and various other things. Some other misinterpreted lyrics include "Saging zombies", "DIE DIE PLEASE!~". Since the official lyrics have been out ("Around three centimeters" is what they actually sing), this meme has died down, but still springs up from time to time. 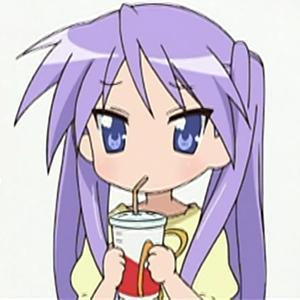 "I highly enjoy these threads. Sip."

An image that many think to be a forced meme, suspecting its posting and rigorous reposting to be the work of one person, that regardless became quite popular due to its exploitability and level of moe.

The iconic Lucky Star image is a relatively small JPEG file, featuring one of the main four girls, Kagami, sipping on what is presumed to be a fast-food soda or milk-shake.

Many edits were made of Kagami Sip, and with each invariable KagamiSip.jpg-thread (which seemed to pop-up at least daily for a while) the Lucky Star-lovers of /a/ proudly showed off their own unique edits. One of the most well-known by-products of Kagami Sip was the "Kagami-Roll", a feat in which Kagami did a full 360 degree roll via 4 sequential posted images, all without spilling her milk-shake. The sequence was later animated. 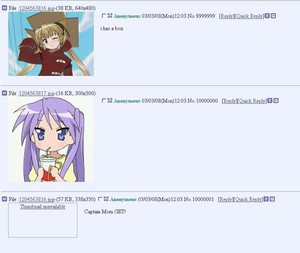 Kagami Sip, like Lucky Star itself, is either loved or despised by the residents of /a/.

None, because I don't watch that piece of shit

Mod meme. Occured early in the lifetime of Lucky Star when an Anonymous responded to an OP with the body text, "What pop culture references did you find in Lucky Star 4?" with, "None, because I don't watch that piece of shit". Without warning, the user was banned, and an Anonymous ## Mod appeared further down in the topic and gave a lecture as to why the user was banned (tl;dr - don't fag up Lucky Star with trolling, though the trolls would argue that Lucky Star is fagged up just by being Lucky Star). The event, which was almost immediately capped, erupted into an enormus shitstorm that drowned /a/ for nearly half a day, almost matching the number of Lucky Star related posts on that day. Evolved into a sort of warcry for trolls, and as sense has seen frequent use in Lucky Star topics along with its partner the sage. A note that since that first ban, no other user who has typed "None, because I don't watch that piece of shit" has been banned, though posts have been pruned by mods/janitors.

One of the most horrid memes based on Lucky Star. In concurrence to the love between Konata and Kagami, a crude 16-panel Paint comic was posted one day on /a/, revealing their passionate relationship. Many Anonymous were sure to have their dicks hard and ready, but the ending revealed that they were in fact playing a game of pretend, much to the horror of all Anonymous reading it. For a short time, whenever their love was brought up to discussion, someone would always post "let's play a game of pretend", and the thread would get saged endlessly. 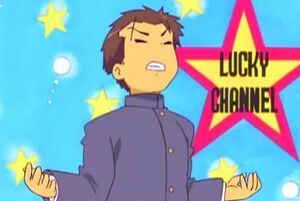 Beneath his mild-mannered boyish exterior boils the hot-blooded soul of a truly GAR man.

Konata and friends' nickname for Minoru Shiraishi, the assistant of Lucky Channel and whose seiyuu shares the same name. Despite Akira's persistence at him, she does not appear in the actual show and it is Sebastian who fills in the role as a random classmate of class 2/3-B. Since episode 13, Shiraishi himself appears in the Ending Theme live and rocking in his renditions of theme songs and originals. He also becomes GAR and returns the favor on Lucky Channel episode 21 with a bringing down of the house. 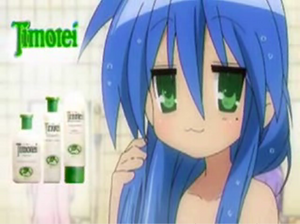 "Timotei" is a brand of shampoo in Japan, widely known for its somewhat musical commercial[5].

Timotei is referenced in Lucky Star during the bath-scene in the beach-trip episode, as Konata mimics the commercial and sings the product-placement jingle trying to get her friends to recognize what she’s parodying. This is an example of a (Japanese) pop-culture reference in Lucky Star, which are fairly common in slice-of-life animes.

Which end is the head?

...is what they talk about for 8 minutes in the first episode. Konata asks her friends which end of a chocolate cornet should be eaten first, along with other food related talk. Most people will generally quit watching the show by this segment, and not even the suggestions that they should watch up to episode 5 before deciding if it was crap or not could help them.

The question of "Which end of the chocolate coronet do you eat first?" is considered the anime equivalent of "Do you know what they call a quarter-pounder with cheese in Paris?".

You can't censor their love

Refers to an ongoing joke about Kagami and Konata having a lesbian relationship. Images that tend to lend to this theory often have this phrase attached. Also, when such images alluding to a more than friendly relationship between Kagami and Konata are posted, they have a tendency to get censor-bars or blurs placed on them over the faces and names of the characters displayed, defying the rallying-cry of the theory-supporters.