From LURKMORE wiki
(Redirected from Macfags)
Jump to navigationJump to search 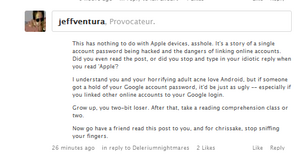 Apple is a company that does not respect your freedoms. They are the opposite of innovation. Their entire business is based on created walled gardens for its mentally challenged users. Their products are low quality and priced at double or higher compared to the "equivalent" generic hardware.

The average Apple product consumer is a mindless follower. This is obvious just from the fact that Apple's current success is completely based on their advertising campaign, and nothing more. When an Apple product consumer is confronted with basic premises such as their freedom, they respond with mentally challenged, almost forced replies that the type of person under the thumb of an oppressive regime would reply with. Their buyer's remorse is shown with every word they type.

macfag is the term used to identify Apple users. It is used in much the same way as /b/tard, only that it has an extremely negative connotation, much like furfag.

Mac OS is the current name of the operating system that Apple develops. It loosely uses Unix as a backend, though Apple's closed nature is the opposite of the Unix values. The only contribution Apple has made to Unix has been obfuscated code, essentially making their contributions worthless. The code contributions are, of course, only made in order to be able to use the Unix code as the backend for their Mac OS shell, without incurring any legal backlash.

As with all of Apple's rabid fanboys, the ones who use Mac OS are filled with buyer's remorse and show it off at every chance they get. Regardless of how severe a bug in the Mac OS operating system is, they will defend it until their masters make a press release, or finally fix the issue after a few years. The standard mantra of a Mac OS user is "it's a feature." Apple fanboys must chant that mantra, otherwise they'd have to kill themselves for spending triple the money for a computer with outdated hardware just because they fell for Apple's "it just werkz" marketing campaign. 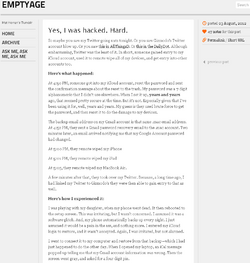 This is what happens when you let Apple remotely control all of your hardware and software.

August 03, 2012, an Apple user named Mat Honen blogged about being "hacked" and having all of his devices remotely wiped through Apple's iCloud service. The following is his account of the incident:

At 4:50 PM, someone got into my iCloud account, reset the password and sent the confirmation message about the reset to the trash. My password was a 7 digit alphanumeric that I didn’t use elsewhere. When I set it up, years and years ago, that seemed pretty secure at the time. But it’s not. Especially given that I’ve been using it for, well, years and years. My guess is they used brute force to get the password, and then reset it to do the damage to my devices.

The backup email address on my Gmail account is that same .mac email address. At 4:52 PM, they sent a Gmail password recovery email to the .mac account. Two minutes later, an email arrived notifying me that my Google Account password had changed.

A few minutes after that, they took over my Twitter. Because, a long time ago, I had linked my Twitter to Gizmodo’s they were then able to gain entry to that as well."

It's okay, macfags are used to getting fucked in the ass

His entire incident was caused not by hacking or bruteforce, as he claims, but through Apple's own incompetence. If it was a bruteforced, Apple would have locked his account after three failed attempts. What really happened is detailed in his update:

Update Three: I know how it was done now. Confirmed with both the hacker and Apple. It wasn’t password related. They got in via Apple tech support and some clever social engineering that let them bypass security questions.

The entire incident proves how insecure Apple's products are, and how user failure just makes the whole situation worse, especially when the user is a mentally challenged Apple employee.