The thread that started it all.

On the day that the anime School Days episode 12 was supposed to be aired, there was major headline news in Japan about a girl who killed her father with an axe[1]. This stupid Eleven action forced the TV networks to not broadcast the final episode (correctly anticipated to be a violent BAD END, a pleasant change of pace for this type of show) and instead aired random European scenery for 28 minutes.

While this debacle was still airing, images of the scenery were posted by a Japanese person with a TV card. An Anon posted these on /a/ with little comment, but commenting "nice boat" on the image of a boat on a Norwegian fjord. A kind anon linked to the /a/ thread on 2ch, and the 2ch thread was linked from /a/ as well. 2ch and /a/ posters invaded each other with "nice boat" comments and an Eleven eventually made a title screen consisting of the said picture with a shoop of the usual title screen, but replacing "School Days" with "Nice Boat" (see image). That said reaction caused many lulz on 4chan, and another Anon came along and made a thread about the said shoop.

At this time, the boards froze. Since no one could post, threads remained frozen for at least three hours and were visible to all who visited, with the "Nice Boat" shoop as the top thread of /a/ for the whole time. Once the boards reopened, every new thread turned into both a "Hate Makoto" and "Nice Boat" thread. These events, combined with "International Talk Like a Pirate Day", turned /a/ into a very maritime experience.

In the mean time, Elevens had posted the whole "episode" on Moontube (Japanese video site Nicovideo), which allows users to overlay scrolling comments on the video. The first 5 minutes are taken by much laughs and anger, but once the ferry appears, it unleashes a torrent of "nice boat" comments. This repeated when the same video was posted on youtube, except in normal comments, not overlays.[2]. Parody videos were also made[3][4]. The "nice boat" phrase made its way into other School Days related videos[5], and even into other anime shows[6]. Fan art (including images, sculptures and paper ferries) were made, and cosplayers have been spotted dressed as the nice boat. There have also been rumors of a nice boat cruise for Anonymous, but as we know real-life Anonymous meet-ups/raids fail unless they either take place at conventions where Anonymous is already gathered, are done by Finnish people, or are against Scientology.

Curiously, when the final episode of School Days aired, there actually was a boat featured prominently in its closing scene. It is unknown whether the animators put it in at the last minute or if it was all JUST AS PLANNED. 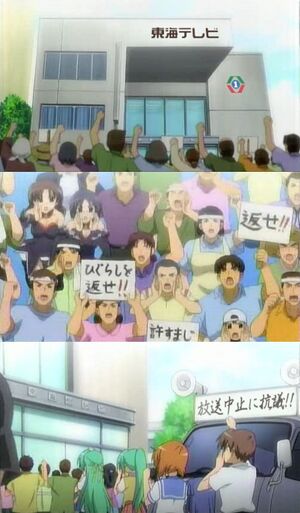 Higurashi no Naku Koro ni was similarly dropped from some channels, in one case being replaced with another set of cleaver-weaving maniacs on Iron Chef. However, while School Days' broadcast was merely delayed, Higurashi was canceled, causing a bout of melancholy among many /a/ssholes.

Some of Nicovideo's "video deleted" messages feature a nice boat

Moontube has since created some of their "video deleted" messages as references to nice boat, with a ferry and the same music. For example, the messages that are played when the video has been deleted by the uploader or deleted for terms of service violation; the copyright violation message is still just shows a scrolling text as of early 2008.