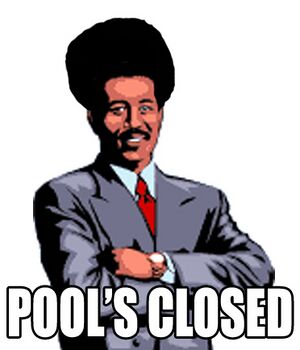 Pool's Closed is the standard battle cry of the Habbo Hotel /b/lockades. /b/tards, or "nigras" as they call themselves on Habbo Hotel (all dressed in Black Tuxedos, pants and with Afros) would enter the Habbosphere Pool Deck en mass and proceed to stand in front of the entrance, changing rooms, and the pool ladders, so that no one could get in. Upset Habbo users will beg /b/lockers to move, only to be told that "Pool's closed. Due to AIDS!" Some Blockers have been known to extort Habbo Gold and furni from those wishing to get by, only to continue blocking after receiving the goods.

Although some find the meme childish and futile, it is generally considered one of the funniest and most successful memes in the history of 4chan Anonymous, with nigras becoming the de-facto face of many raids to come after the meme achieved popularity. Indeed, the popularity of Pool's Closed has spread far beyond the chans, as one of the most enduring marks Anonymous has left on the Internets. At ikasucon 2006, two 4channers named "Sempai's Pleasurous Nutrients" and "Bakasama32" started the Habbo Blocker cosplay trend, which continues to this day. Popular convention targets are of course hotel pools, Gaia panels, and 4chan panels. There is however a downside to this popularity: it draws wannabe-nigra newfags into the raids. Such wannabes often fail to respect Rules 1 and 2, actually attributing the raid to 4chan instead of blaming eBaum's World and Gaia Online as is the proper procedure.