One of the various hazards/insanely awesome things encountered in thinking with Portals.

Portal is a game designed by Valve and released on the Orange Box that uses an innovative new game-engine to dynamically connect two points in space. You shoot a portal-opening on one wall, and then another on another wall, and the two points become connected in real time. Naturally, /v/ is enamored with such an awesome and innovative concept for gameplay, and even more enamored with the prospect of using such a device to perform interesting sexual acts on themselves.

The Cake is a Lie 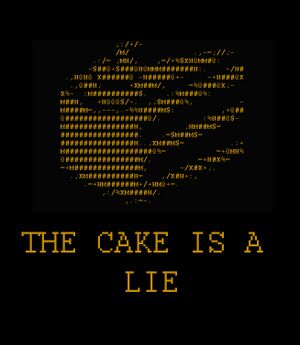 Throughout Portal, GLaDOS, the super-computer administering the test, promises that in addition to furthering scientific advancement, the player will also be rewarded with cake upon completion of the test. Also throughout Portal, the phrase "The Cake is a Lie" is seen scrawled on walls and inside vents in a desperate and crazed manner, presumably by an earlier test-participant; one who might be trying to warn you of something. From this it can probably be inferred that GLaDOS and Aperture Science have something other than cake waiting for you at the end of the test.

This meme has become extremely popular, which despite being taken directly from a videogame (which would normally make it a /v/-exclusive meme), has found its way onto various other boards such as /a/. This line is invariably chimed by users anytime a post is made by someone claiming they did anything involving a cake, with the responders steadfastly asserting that the cake was in fact a lie.

Its usage has been raped by communities outside of 4chan, and now mentioning cake (or Portal in general) is guaranteed a few "FUCK YOU"s. 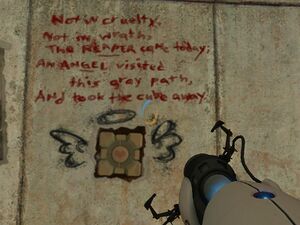 In Portal, the player will often use weighted cubes to do things like hold-down triggers or knock over turrets. However, at the beginning of one level in Portal you are given a special cube; The Aperture Science Weighted Companion Cube; which faithfully accompanies you through the rest of the level. Distinguished from other cubes by the pink hearts located on each of its six sides signifying friendship and admiration, /v/irgins who played Portal immediately fell in love with Companion Cube, and had circumstances permitted, would have remained inseparable from it. However, by the end of the level, GLaDOS informs you that testing cannot continue while you have your Companion Cube, and that it must be “euthanized” by being dropped down an incineration-shaft. This was a crushing emotional blow to many players, many of which claim they cried as they watched Companion Cube fall into the fiery pit below it. The morning after Portal was released on the Orange Box, /v/ was filled with posts of weeping, mourning, salutes and tributes to the noble Companion Cube, whose loyalty to the player, even when it meant its death as was ordered by the tyrannical computer, allowed the player to complete the game. Its sacrifice will not be forgotten, and Companion Cube will live on in the hearts and minds of gamers for eons to come.

The phrase the computer ends the Portal-demonstration with in the original trailer, basically to sum up that you as the viewer are now understanding the new abstract way you’ll have to think when solving the puzzles in Portal, and was a pretty cool slogan for the game on the part of Valve.

This phrase is commonly seen in Portal-threads, basically meant to imply that what you’re doing demonstrates an awesome way to use the power of portal-technology, weather it’s creating synthetic perpetual rotation, or just using them to fuck yourself in the ass.