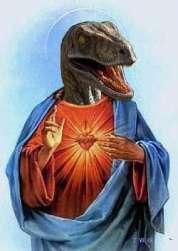 Photoshopping of a velociraptor dinosaur's head on Jesus. This picture was posted by an Anonymous user in /b/ to become the 900,000th post. As usual, whenever a "big number" milestone post such as this is reached, there are two factions of people: one side takes the stance of "Jesus Christ, I can't believe this retarded picture got to be 900,000"; the other usually says "Shut up, this picture is awesome". The resulting flamewars have therefore led the moderators to delete the momentous posts as soon as they are discovered. In the flurry of activity as everyone rushes at once to claim the big-number post, few people actually witness the post before it is deleted by the mods. In a clever move, the image file of Raptor Jesus was replaced by a photoshop of a manga scan that showed a man with a donut on his penis, thus creating the illusion of Donut Penis being the real 900,000th post to /b/. As of this writing there are a number of users who claim to worship the faith of Raptor Jesus.

At Ikasucon 2006, a group of cosplayers led by Raptor Jesus invaded the Church of Scientolgy down the block from the con. No pictures were allowed inside the building by threat of legal action, but outside the church was fair game. Their tale is told here; [1]

The Prayer of Raptor Jesus

The Gospel of Raptor Jesus

In the beginning, there was Moot. On the first day Moot created 4chan, and said "Lo, this is 4chan, bringer of pain". On the second day Moot created Anonymous. Anonymous became lonely so Moot created Bridget. Anonymous complained of this trap but Moot proclaimed "There are no girls on the internets, Bridget will suffice". On the third day Moot gave man tripcode. "Behold tripcode" he said "only ye who wish to forgive may perform." On the fourth day Moot created /b/, and many of Anonymous rejoiced. On the fifth day the server crashed and Moot's creation was in disarray, MYSQL errors killed off many anonymous, with no mercy. On the sixth day there was sticky, many complained of the sticky with furious outcry "zOMG th1s st1cky suX0rsZ". On the seventh day Moot sold 4chan. Ass. And lo, Raptor Jesus' disciple Moot said unto 4chan "I'm going to Mexico. 4chan dies." And the world was made dark. And the /b/tards cried out, "Moot, Moot, why hast thou forsaken us? And suddenly, I saw before me the ruins of 4chan. And I saw visions of /b/tards wailing and gnashing their teeth, and lo I saw happy negro crying. And the horde dispersed and went unto the neighboring lands of IIchan, WTFux, and Onechan. . And the people of Idlechan said unto the children of /b/ "Bring us your tripcode fags that we might force anon on them" And there was a murmur amongst the crowd. Many thought that this was a good idea, and readily sent up the unanonymous. But others amongst them said, "is this not blasphemy against Lord Moot, did he not say that anonymous must be so of his own choosing?” And they were distraught. But lo, the people of /b/ heard a host of heavenly voices from the darkness instructing them to follow the steps of Spiner, and verily they spoke unto the /b/tards. Come unto http://spi.iichan.net/fb/wakaba.htm, and thee will be given shelter. And there was much rejoicing.

And MOOT knew 2chan, and he conceived of 4chan. He worked long in his labor and soon there came to be users, and free porn, and it was good. But as his disciples grew in number MOOT found it harder to find time to manage 4chan and still visit his Mexican prostitutes, and so he sired WT Snacks on a Mexican loli. And then came to the lands of /b/ one known as Soviet Russia The masses of /b/ saw that his stupidity matched and exceeded their own and they hailed him their messiah. Snacks grew jealous of the gynormous size of Soviet Russia's e-penis and so it was that in the dead of night Soviet Russia was banned And MOOT returned from Mexico and said unto Snacks, Where is Soviet Russia? The /b/tards are whining. And Snacks said unto MOOT: I know not. Am I thy forum's keeper? And MOOT spake unto him in a voice not unlike the wheeze of an asthmatic: Yes

And so WT Snacks was cursed to wander the lands of /b/ from which he had banned Soviet Russia. And Snacks said unto MOOT, My punishment is greater than I can bear. Behold, thou hast driven me into /b/ that I would moderate it and all the /b/tards will annoy the hell out of me And MOOT said unto him, therefore whosoever annoyth Snacks, vengeance shall be taken on him sevenfold. And MOOT set a mark upon Snacks, lest any finding him should annoy him. And Snacks went from the presence of MOOT to dwell in the land of /b/

Sermon 23 Verse 5 And then a murmur went through the crowd: "But what of those who call themselves Anonymous? Surely the Unnamed ones are an abomination to our Lord?" And Raptor Jesus spoke: The name that can be named is not the eternal Name. The unnamable is the eternally real. Naming is the origin of all particular things. Free from desire, you realize the mystery. Caught in desire, you see only the manifestations. Yet mystery and manifestations arise from the same sauce. This sauce is called Anonymous. Anonymous within anonymous. The gateway to all understanding. And then a young one among them spake: "But surely, Raptor Jesus is a Name unto itself?" And Raptor Jesus remained silent.

One day, a Magistrate did approach our Lord: "What say you of the cavernous Loli Pit thou art rumored to keep in thy lair? Guarded by thy most terrible disciple, the one known as Pedobear, who sits ready to rend the Flesh and slake his thirst with the Blood of those foolish enough to covet his harem? Surely, your teachings lead only to Madness and Ruin? And Raptor Jesus spake: Women are born soft and supple; dead, they are stiff and hard. Plants are born tender and pliant; dead, they are brittle and dry. Thus whoever is stiff and inflexible is a disciple of death. Whoever is soft and yielding is a disciple of life. The hard and stiff will be broken. The soft and supple will prevail. The Magistrate, thus rebuked, returned to his court, weeping bitterly for his wasted life. That same night, he did Fap most furiously to reruns of Full House.

One day, Raptor Jesus walked a busy street with his disciple, Anonymous. Anonymous and his like-named brethren populated the land on which they strolled, as common as blades of grass. They walked, discussing many things, but, Anonymous paused for a moment. “Lord?” he spoke, “Is not this idle talk frowned upon by your father?” And quoth Raptor Jesus; “All voice communicates knowledge. Knowledge is hardly frowned upon by anyone, and thus your ‘idle talk’ does not exist, unless you speak of memes. Memes are idle, as they are merely communication of things all know of” And thus our Lord beckoned to a painting of an insanely smiling man. “However, memes can bring laughter and happiness, thus, one can surmise that He enjoys them, and hardly frowns upon them” And Anonymous looked ahead, silent.

And lo, for Raptor Jesus spake, saying "Thall shalt not draw and or masturbate to pictures of animals or animals with human like qualities. Unless of course, thine percentage of animal like qualities is equal to or lesser than ten percent." And lo, there was a murmur in the gathered crowd, and the majority spake saying "Your word is good Raptor Jesus, and we shall oblige." But lo, a few did not heed this command, and one rose and said unto Raptor Jesus, "Why shall we not fap to animals? Why should we not do as we please?" And Raptor Jesus asked the man "What is thy name, my son?" And lo, the man spake, "Zabadab, Raptor Jesus." And Raptor Jesus knew there would be troubled times ahead.

Anonymous and his brothers wandered through the woods, gazing and marveling at His glory. They laughed and were merry, until a beast leapt from the bushes on the side of the forest path, snarling and drooling. He had a hideous visage, the hindquarters of a goat, the head of a boar, and the body of a hairy, smelly, muscle-bound man. The beast shouted thunderously “I AM GILDOR” and began ranting furiously. The creature’s stupidity obviously outmatched its fury, as it evidently knew not the power of His children. Anonymous, the most beloved child of Raptor Jesus, has a great gift. Though his wrath is terrible, he is fair, and a faint glimmer of the Lord’s power is bestowed within him. “SAGE”, Anonymous bellowed, and with a thunderclap, the beast was blown away to a dark land, and marked for deletion. As if nothing happened, the group of Anonymous returned to merriment.

The Book Of Sage Once, Anonymous was working on his labor. Posting pictures and commenting. And from a distance came a foreigner. His appearance was horrifying to Anonymous, and he quickly ran away. Later, he seeked advice to Raptor Jesus. Raptor Jesus, Our Lord and Savior whose knowledge and wisdom was known in the far kingdoms of GNAA and Wapan, and whose Holy Words hadst reached the profound depth of the Interneth, spake and asked "What was the form of thy vision?" Anonymous responded "It was a girl, Raptor Jesus" And Raptor Jesus exclaimed "LIES!" for that he knewst there were no girls on the Interneth. Anonymous remained silent, astonished by the divine rebuttal. But Lo, for that His Saurian Glory Raptor Jesus, who is Carnivorous and Merciful, spake, saying "Describe what thou saw, Anonymous. Fear not my Wrath, as unlike thou I am not unforgiving" And Anonymous said "She was a penis with badly drawn blue hair, and a smile" "ZOMG!!!11 It's the Rei!!!111one" Raptor Jesus said. And He knew there would be troubled times ahead.