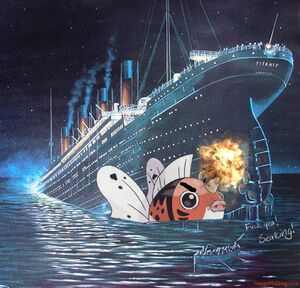 FUCK YEAH! Seaking! Is a forced meme that started with a shopped picture of Titanic and a Seaking. The Seaking is shown ramming the Titanic, while a passanger in a nearby life boat is cheering: "FUCK YEAH! Seaking!" FUCK YEAH! Seaking! is often shopped into natural disasters. Although it is a forced meme, most argue that it is more amusing than most memes, and it has also spawned a number of spinoffs (although none of them had any real staying power). Therefore it has been accepted as a true meme.

A /co/ variant has Marvel's Namor or DC's Aquaman with 'FUCK YEAH! SEA KING!' shopped over it, both characters being rulers of their respective universe's oceans. A similar variant also pops up occassionally in /k/, using a military helicopter called the Sea King.