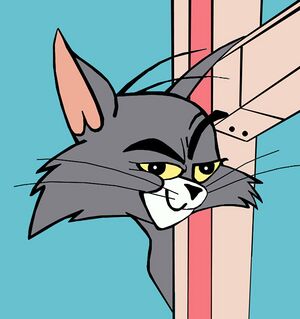 If I see that fucking cat one more time...

Cover-Tom is a forced meme showing Tom from the "Tom and Jerry" cartoons (specifically the shitty Chuck Jones version) with a smirk. Oft accompanied by an allegedly witty phrase, or "I see what you did there." Cover-Tom was also the 9.2M post on /b/, as well as the 9.3M post, albeit in his "Lite Brite pieces" appearance.

Cover-Tom is notable for becoming one of the very few forced memes to graduate to full meme status.

Cover-Tom inspired the phrase "IF I SEE THAT FUCKING CAT ONE MORE TIME..." after Tom had been floodposted to /b/ for what seemed like days, and the practice of posting a picture of corrupt US Congressman Tom DeLay, with a similar look on his face (delayclose.jpg), in response/competition.