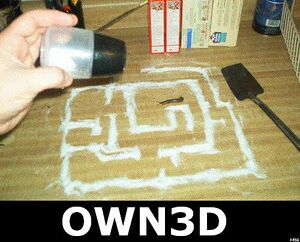 Do you get it NOW, motherfucker?

You can connect to undernet via IRC, on us.undernet.org or eu.undernet.org. It is very important that you do not, under any circumstances, connect to undernet. If you choose to ignore this warning, I am not responsible for any resulting mental/emotional issues. The biggest collection of dumbasses and perverts on irc, possibly the entire interweb. This makes it a prime baiting/trolling target, as even the ops in the various channels are seemingly incapable of understanding when they have been trolled.

You already admitted you were in the closet.

Seems some are incapable of understanding logic.

They do say that the children are the future...FUCK

PROTIP: If someone repeatedly uses a phrase that you don't understand/recognize, google it. It may save you from goatse.

I never even got to let him know I'm a dude.