From LURKMORE wiki
(Redirected from User:FetusMan)
Jump to navigationJump to search 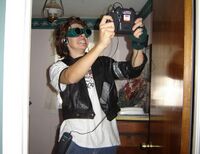 In December of 2005, the infamous "Game Gear Man" photo was taken and posted on /b/ and /v/. It was posted frequently over the course of the next few months (mostly by him) but other anonymous started to use it in various situations. It is a popular photo for sticky floods, and was also used in the /b/ raid that crashed 4chan on /b/-day 2006.

Eventually, threads started to arise combining his face from the photo with dozens of other memes and /b/ catchphrases, or simply other images that were popular at the time. These images spread around /b/, and can be seen in use by random anons on occasion. (Gallery of all known Capn-meme pics)

Back around 2005-2006, Captain has been involved with many major /b/ raids, either on major levels in terms of crapflooding and organization, or even starting the raids on deserving targets. He is credited with starting the highly successful Zelda Guide raid, and the initial parts of the Zelda Universe raids in the summer of 2006. He was also a driving force behind the anti-Furry raids that sparked /b/-day, as well as doing his damned best to try and hold the /b/tards together on 7chan rather than let them drift apart to various weaker factions during the ensuing Civil War, going as far as to author the Declaration of /b/ Independence in order to unite Anon.

Disappearance from /b/ and the Zangaroa Trolling Group

After amassing a sizable legion of warriors and /i/nsurgents handpicked from 4chan, 7chan and various other message boards, the infamous Zangaroa Trolling Group (later known as Zangaroa Entertainment Services) came into being. Acting outside of the confines of imageboards, Zangaroa was responsible for several raids over the course of 2007-2008, all of which resulted in several major websites being taken down.

Zelda Universe was hit again in the summer of 2007 and several more times after that by /i/nsurgents on 420chan with ties to the Zangaroa group. 2007 also saw the destruction of a random InvisionFree forums as well as Shaun Barrett, former Anonymous who had started attacking Anon strongholds.

2008 brought with it an attack on furry pedophile Patrick McCallum, as well as the infamous Bill Mitchell raid, which also resulted in the utter destruction of the entire Initialized-IRC network and several message boards tied to it. Along with the Bill Mitchell and Init-IRC raid, Zangaroa saw itself briefly allied with the Substantia trolling group, who teamed together to bring the pain train to Gurkirat Vig. However, Substantia would soon vanish completely without a trace after reports that they were amassing stolen credit card information.

August 2008 saw Captain get arrested, not for hacking websites, but rather for getting completely shitfaced and borrowing a car. Not much of the actual event can be remembered, aside from there being lots of vomiting, property damage, and waking up with a killer hangover the next morning nearly 200 miles from home in New Jersey. Since his arrest, he has been married, divorced, and is currently couchsurfing around the country. He was released from probation on August 24, 2010, once more being loosed on an unsuspecting world.

As for Zangaroa, it eventually morphed into the security-consulting firm Zangaroa Enterprises, which rents its knowledge of the internet out to the highest bidder.