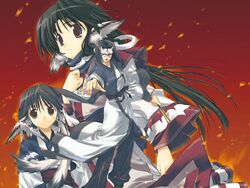 Utawarerumono, better known as Underwater Ray Romano is a tactical RPG/visual novel developed by the (now bankrupt [1]) eroge company Leaf/AQUAPLUS. Often called "Suikoden the Anime", it was one of many good anime to appear in Spring 2006 following the abysmal failures of Winter shows like Fate/stay night. Its popularity, while strong, was muffled by the juggernaut that was The Melancholy of Haruhi Suzumiya and later Higurashi no Naku Koro Ni. While well regarded on /a/ during its run, after ending it fell into obscurity, but surged back into popularity when Mirror Moon suddenly announced they had finished translating the game and released an English patch. Considering Mirror Moon has been delaying the Unlimited Blade Works patch to spice up the "installer", this was a mixed blessing. Given the long delay for Unlimited Blade Works, many Anonymous found themselves disappointed with the installer for Utawarerumono. 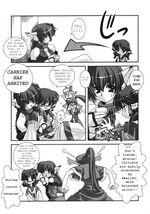 A meme that originated partly from yesy's subs of Utawarerumono where they left the comment "Carrier has arrived" in the episode where Karura was introduced, and partly from a wordplay based on Karura's name as it sounded like "Carrier". The fact that carriers in Starcraft were large and overpowered (which Karura was, especially her huge sword) only contributed to the meme. Made popular by a shopped doujin page that had the dialogue replaced by memes, particularly the portion that had Karura fondling Aruru and saying "Carrier has arrived".

It's Popular in Australia

Unusual line that appeared during the summer of 2006. Around the time Utawarerumono was licensed, an Anonymous got into an argument with several other Anonymous over successful anime, claiming that Utawarerumono was a favourite in the "Australian offline anime scene". This comment was widely jeered, since Anonymous being the hikikomori that he is would have no idea what would be popular with "mainstream" anime fans, nor would he have any way of being able to account for this popularity. Permanently tied in with its companion meme, "Underwater Ray Romano". With the incident fresh in the minds of many, the joke hung around for a couple months though is rarely used anymore. Later seen along with "Ottawa Ray Romano" as "It's Popular in Canada", during a nostalgia bomb for the show in summer of 2007.

Hilarious dub title for the English language version of the series. When the announcement of the anime's licensing at Otakon 2006, many Anonymous (and the whole internet, it seems) were horrified to learn that ADV Films, feeling that a title wish such an obscenely long name decided to change it to something that would be appealing to an more mainstream anime faggot. Some Anonymous laughed, others cried, and many more raged hard because there are now Shadow Warriors in Utawarerumono, and a deceptive title like reeked of cheesy marketing ploy. After much bitching, the original title was retained, but the DVD covers were completely redone to single people or objects placed over a field of grass. One of these covers would later be edited by Lord Phrozen into one advertising "Underwater Ray Romano". 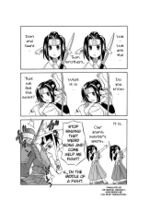 Page taken from a one shot doujin of Utawarerumono, featuring the trap twins Dori and Gura.The two archers are utterly devoted to their master, Oboro, who they affectionately refer to as "waka-sama". However, this devotion appears to extend beyond mere camaraderie and loyalty, which is usually apparent when the twins fawn over Oboro behind his back. All this culminated in an outrageously funny moment in the anime (and game) when, in a drunken stupor following a binging session with Hakuoro, Oboro ends up fucking both archers at the same time and wakes up the next moment with them lying around him. Everyone's naked. The doujin plays off of this relationship, where Dori and Gura break into song about craving their master's sperm, much to Oboro's dismay.

Originally considered a forced meme, since it was posted in any topic vaguely related to Utawarerumono and wasn't really that funny, at least compared with what happened in the anime/manga. However, the Sperm Song became a bit more popular when people started to ancticipate its posting, resulting in rushes of people to say "In before Sperm Song" after the picture was posted, and following the fact "In after Sperm Song". The Sperm Song only achieved meme-level popularity, though, when another version of the same doujin page (apparently a parody) floated around /a/ as well. The main difference with this page was Dori and Gura were drawn in a heavy set ink style and were bulked up, making them look extremely manly despite the trap-like song they sing. At the bottom of the page, Oboro looks on in horror as if the twins were preparing to suck off of him. 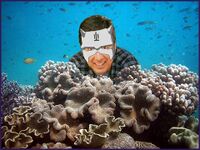 Dated meme from /a/ that was very popular during the summer of 2006. As the anime Utawarerumono entered its second season and increased in notoriety on the board, the infamously long and hard to pronounce name went through several phonetic bastardizations (see: Atari Dumbledore) following a shop of Ray Romano from Everybody Loves Raymond wearing Hakuoro's mask (also leading to everyone calling Hakuoro either Ray Romano or simply Ray). Everyone eventually settled on "Underwater Ray Romano" as a proper title after another shop appeared of Ray chilling out under the sea. It was later combined with the 'Utawarerumono: It's Popular In Australia' meme to become Down Under Water Ray Romano. A year after interest in Utawarerumono had peaked, a few topics appeared pouring love for the show and some new variations on the meme surfaced (pun not intended). In this case, several Anonymous tried to work out better word play than "Under Water", and came up with "Ottawa", a Canadian province. This was accompanied by (what else?) a shop of the masked Ray Romano with the Canadian maple leaf flag draped on a wall behind him.