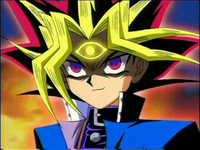 An ongoing meme featuring Yami, the alter form of Yugi in Yu-Gi-Oh!, which was started on November 24, 2007. A poster will post an image of Yami making some kind of prediction, which always involves a post that ends with the number 5, usually in the form of "This post will end in 5" or "Next person in this thread whose post ends in 5 gets his mind crushed" (A further play on Yu-Gi-Oh!).

On July 16, 2008, on his official Nonoba subpage, he announced his retirement from GETs, although rumors have spiraled around that he still goes for them on rare occasion. Nevertheless, there are still several impostors about, which can be identified by their low success rate, a limited supply of Yami images, and constant spamming of said images.