Unlike a tsundere, who is cold and unfriendly but occasionally nice, yandere are ostensibly nice characters prone to intense psychotic episodes. Although they're often used to deconstruct cutesy stereotypes in anime and generally freak out the audience, /a/ tends to be fond of them, either because they create a bizarre feeling of protectiveness in Anonymous or mirror the kind of berserk lashing out otaku dream of. 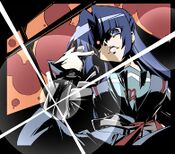 Also known as Canada, Eyebrow-tan, and Knife-tan, she is the psychotic alien bound to kill Kyon in The Melancholy of Haruhi Suzumiya. Cute and HOT on the outside but unemotional on the inside, she tries to murder him without hesitation while maintaining a cheerful face and voice. Killed by Yuki, her death is covered up as having to "move to Canada."

Also known as "Euphie". A character from Code Geass who initially was nice, sweet, utterly boring spoiled princess. Originally, the only Anonymous who really cared about her were the ones wanting to see incest between her and her half-brother, Lelouch Lamperouge (or her extremely hot, badass, and possibly bisexual older sister Cornelia Li Britannia). As was the case with Kaede Fuyou, her popularity skyrocketed due to her unexpected and intense bloodlust. In her Geass-induced state, Euphie slaughtered approximately 200,000 "Elevens" within the span of about five minutes. She is now also known as "genocide-tan" or "the Euphienator". Commonly used to sage posts made by "Japanese posters". Her Yandere status is debated as the massacre was only triggered because of Lelouche's accidental use of his Geass.

A character from the harem anime Shuffle! which is based on a hentai game of the same name. Suddenly exploded in popularity on /a/, /e/, and /h/ when she was revealed to be psychotic in episode 19 (some time after her childhood male friend Rin 'ditched' her for Asa). Shopped pictures made to include her holding a boxcutter and other shopped pictures with Asa's face scribbled over with black marker (as Kaede did in the anime) became commonplace for a few days. Her psychosis proved to be brief and disappeared after episode 21, making her popularity a relative flash in the pan. Still holds a special place in many 4channers' hearts, due to her charming and 'perfect housewife' personality. She was later immortalized in a Flash loop ([1]) featuring a .gif of her trembling with a deranged expression on her face with the song "They're Coming To Take Me Away" by Napoleon XIV as background music.

Her weapon of choice is the boxcutter, which has become a meme in itself.

From Mai-HiME and one of the earliest known yandere since Kaede Fuyou. The HiME are a group of girls who obtained powers and guardians. The turning point of the series started when it is revealed that one HiME must eliminate the rest in order to preserve the world. Shizuru is an old friend of Natsuki Kuga and nursed her back to health after she was attacked by another HiME. Late at night, Natsuki overhears an argument with Shizuru and two other characters and finds out that she may have been sexually molested by Shizuru. Shizuru tries to make another advance on Natsuki again only to end up rejected. She then proceeds to kill those she considered as Natsuki's enemies. This seemed to be purely situational, as the version of Shizuru in Mai-Otome doesnt go nuts and seems to genuinely be Natsuki's girlfriend (though this might be an effect of her huge popularity with fangirls) so the crazy bitch torch is passed to Tomoe.