Your resistance only makes my penis harder! 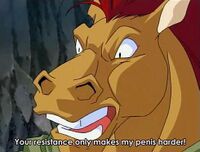 I have a name. It's Stallion, nehehee!

Classic meme from the golden age of /b/ and commonly associated with /a/, though it may have circled around Something Awful before it came to /b/ and was seen on YTMND as early as 2004[1]. It's a screenshot of Stallion, a half-horse half-human officer in the Army of Shadow from the H-anime Words Worth. Stallion has the habit of taking female prisoners to the torture tower and raping them, and when they struggled against him he just got more excited. However, when they cry he starts to feel sympathy and loses a lot of his sexual drive, which turns out to be a critical weakness. Part of the humour around the meme is that horses (particularly horse cock) is a rather touchy subject with many Anonymous, especially in the non-worksafe boards like /b/ and /gif/ where it is viewed with hatred and horror. Naturally, it became funny to spam the image around just to upset people, though it's also funny because horse rape is just too weird. Many Anonymous now think of Stallion whenever they see horses in anime, and cries of "RESISTANCE!" are not uncommon when one happens to appear.