This page is about the collective of Internet souls known as Anonymous. For the imageboard service, see Anonymous Posting 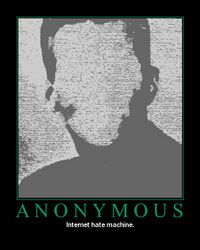 True /b/tards are rarely seen in real life, while "fake" /b/tards flaunt their vague understanding of memes with some kind of pride. These are often seen at anime cons, and are looked down upon by the true, faceless army of /b/. Also the reason why /b/tards rarely are seen in public is because they would be promptly arrested for any list of crimes ranging from hate to sexual assault.

You may love them. You may hate them. But if you ever decide to invoke their wrath, pray to Snacks and hope for a swift and painless death. Earning their ire, bystanders and peers will only have this to say: You are already dead. 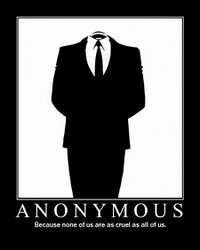