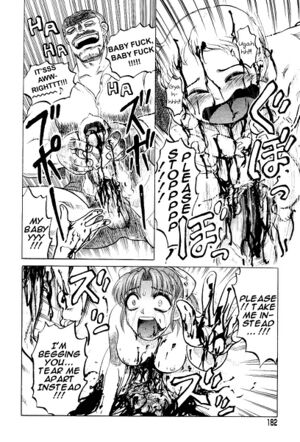 BABY FUCK BABY FUCK is from an image that initially appeared in a manga, by notorious guro artist Waita Uziga, titled Mai-chan's Daily Life. The strange language that was used in the translation eventually helped make this a popular meme on /b/. It's most often seen in a motivational poster of the same title.

The quick summary of the story is that Mai-chan can regenerate her body as long as any bit of it still exists to regenerate from, because of this she was taken as a sex slave who is tortured in the worst of ways. She is forced to have sex with her brother (whom she only recently found out about and has the same problem as her) and ends up carrying his baby. She is then abducted by the President of the United States, and when he discovers that she is pregnant, he cuts her open and fucks the baby. In one panel he is seen yelling "BABY FUCK BABY FUCK" and "IT'SSS AWW-RIGHTTT!!!".