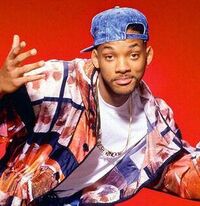 Now this is a story all about how...

Bel-Air refers to the posting of the themesong from the popular 90's sitcom "The Fresh Prince of Bel-Air". In mid-2006, posters began countering extremely long copypasta with a "Bel-Aired" version, in which, halfway through the copypasta, the text was replaced with the following lyrics from the opening credits of the show.

... my mom got scared and said
"You're moving with your auntie and uncle in Bel-Air."
I whistled for a cab and when it came near,
the license plate said "Fresh" and it had dice in the mirror.
If anything I could say that this cab was rare
but I thought "Nah, forget it, Yo homes, to Bel-Air!"
I pulled up to the house about seven or eight
and I yelled to the cabby, "Yo homes, smell ya later!"
I looked at my kingdom, I was finally there,
to sit on my throne as the prince of Bel-Air.

The Bel-Air theme has since been used for a variety of purposes, including modifying the lyrics to ridicule people or glorify anonymous, as its own copypasta, and more.

Bel-Air has become synonymous with Invasions, much like the nigras and DESU. It is especially popular on phone-in raids, where callers will put the phone up to their computer speakers blasting the Fresh Prince, though more accomplished anon will rap it out themselves. In MySpace raids, it is Official Invasion Policy that every defaced and stolen MySpace page must have the song changed to the Fresh Prince, which you can grab from the Will Smith MySpace