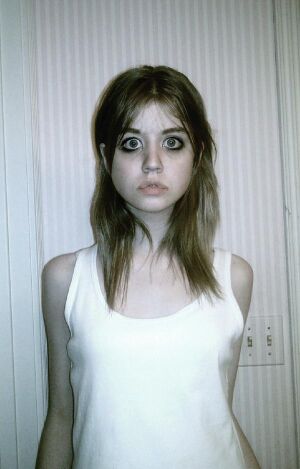 one of the original images found

Creepy faded into obscurity in early 2006 until Anonymous found her MySpace and the wealth of pictures it contained.[1] It became apparent that Creepy-chan was not always or could not always be creepy, so her dual personality was born - Cute-chan. Cute-chan does not wear heavy eye makeup or wear pink dresses and stand on coffee tables; rather, she wears normal clothes and goes about her everyday business in a decidedly cute fashion.

Several /b/tards claim to know Creepy-chan personally, but this is most likely false. One early picture of Creepy-chan has surfaced, however, leading some to believe that she may have /b/tard friends she doesn't know about. 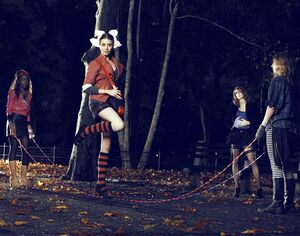 Creepy-chan was one of thirteen contestants on the most recent cycle of America's Next Top Model, which premiered on February 25th.[2] She placed second as runner-up to the winner, Teyona.

The artist was originally recruited by a casting agent who had discovered her online.[3] On the show, she was frequently noted for her large, distinctive eyes. She befriended fellow contestant Celia, who was eliminated before the finale episode.