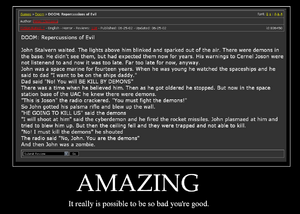 DOOM: Repercussions of Evil is a piece of fan-fiction that’s viewed as possibly the grandest failure to ever grace the internet, the world of fan-fiction, or even creative writing as a whole. Though all fan-fiction is bad, DOOM:RoE goes above and beyond what is expected of the lower-end of the scale when it comes to crappy fan-fiction, surpassing even stories like BLACK CRISIS WITH MASTER CHIEF, Metal Gear – Fight of Metal Gears and Half-Life: Full-Life Consequences. This failure on an almost biblical scale etched itself into internet-history as well as the hearts and minds of /v/irgins and internet-goers everywhere, filling them with both uproarious laughter and earth-shattering new realizations of how pathetic people can actually be. This train-wreck of a fan-fiction was “written” by someone who calls himself “Peter Chimaera”, and the original atrocity can be read in full here.

DOOM: Repercussions of Evil, like all epic failures concerning fan-fiction, features almost every quality that makes fan-fiction suck, though exponentially worse than usually seen. Though its most prominent component is its utter incoherence and lack of continuity or sense that makes it almost indecipherable, and displays a tenuous understanding of the subject-matter itself, making you wonder if Peter Chimaera has even ever played Doom. This lack of coherence is made even worse by the copious spelling and grammatical errors present in the piece. 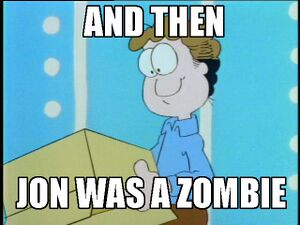 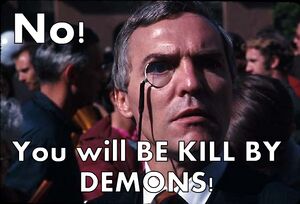 DOOM:RoE inspired a things like artwork and shoops that mocked the ridiculous story, as well as spawned several memes when it was first introduced to /v/ and 4chan. The most well-known of these was “No, X. You are the Y”, a meme inspired by the last lines of the fan-fiction:

"No! I must kill the demons" he shouted
The radio said "No, John. You are the demons"
And then John was a zombie.

Other memes are quotations that include “No! You will BE KILL BY DEMONS” and “HE GOING TO KILL US”.