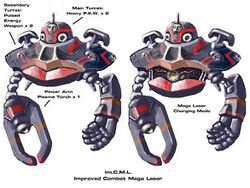 A robot built by one faction of the Lion Empire, the infamous big-headed Grays. Low technology level, but very fast. Supported by an invasion fleet of flying saucers in the first volume, invading Evaikari.

Low-level Super Robot type. Probably one of the earlier MotW that Ohta has to fight while he's still familiarizing himself with ENIS' capabilities. Confirmed: The First Enemy. Will need a better name though.