Difference between revisions of "Emo" 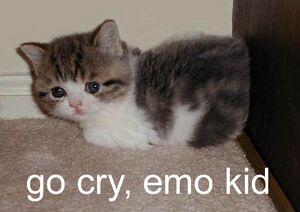 A cat version of an emo macro

Short for "Emotional", a sub-genre of punk music created in the 1980s that died and was reborn somewhat disfiguredly in the 1990s and popularized by bands such as Weezer, Simple Plan and Dashboard Confessional. The lyrics to emo songs are often dark, confessional and self-loathing in nature, and lacking in specific details; as a result, it is primarily listened to by depressed, traumatized and/or emotionally unbalanced teenagers and while emo bands often have huge cult followings they are generally derided by serious music fans as simplistic and whiny. A broader definition detaches from the musical origin and describes people who are more introspective over their feelings.

More recently (noted though not exclusive to 4chan) it has become an adjective used to describe those who are overly depressive; angst ridden; dress in black; listen to Linkin Park, etc. In other words: the new Goth. Wordfiltered to "bosnian" on /b/. A more common use of the word is in the phrase "Cheer up, emo kid", in response to anyone who makes a post containing whining, overly emotional language, appeals for pity or sympathy, or complaints about the poster's own personal life. However, the term emo has become rather overused, particularly with regard to describing anime characters: sometimes a character who expresses any emotions at all will be called emo, if an /a/sshole doesn't like the character.

Note: Linkin Park is not actually emo, it's nu-metal, but both can be pretty whiny when they want to.