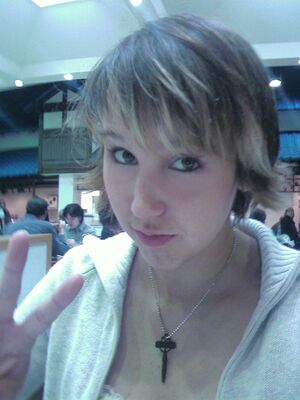 Kanji-chan is a compulsive liar.

When the standard TITS OR GTFO command was made on /b/, Kanji-chan followed through promptly.

She posted a followup some time later, with much newer pics. Fortunately, a troll had flooded the thread with "kill yourself /r/" which caused her to create a new thread on chansluts which was also quickly spammed.

She expressed desire to be the "Greatest loli ever", whatever that means. She said she plans on attending 4chan panels in order to participate in the showing of tits, though that's a lie and would never happen. She's quoted saying, "I only do this because I'm bored. I don't really have any other reason to do it." In reality she does what she does because she is insane.

Kanji-chan plays furcadia and tells everyone said hates furfags in order to protect herself from being persecuted by anonymous. Her excuse doesn't really make sense because she wouldn't keep playing if she didn't like anyone in the game (this case is similar to FBI-chan).

Around May 22nd 2007, 4PM EST, Kanji-chan said she was injured by a hot oil splash into her right eye. To quote her from chansluts, "Hot oil + eye = horrible popping noises and screaming."

On November 8th, 2007, she admitted to the world that she is not half-Japanese but actually a mutt and that is was fun to mess with everyone. She also stated, that she is not a weeaboo and is not that overly interested in Japanese culture. Though all of this was a lie, as is everything she's ever told anyone she has ever talked to.

Kanji-chan said she would stop using imageboards, January 26, 2008, vowing never to come back to post. She stated that she would rather disappear from the internet altogether and she has more important things to do. However, she does apologize to everyone she has offended (everyone she ever talked to). This is obviously completely untrue as she still goes to many imageboard sites.

Kanji-chan is fairly incompetent in real life as well. She blames everyone else for her problems (like all camwhores) the same way she blames the internet for spam on her threads on /b/. She pretends that she is going to become an amazing pastry chef and open up a shop but in reality she is probably going to fail her schooling and has no money anyway. She is also going out with a guy who only talks to her when he wants something.