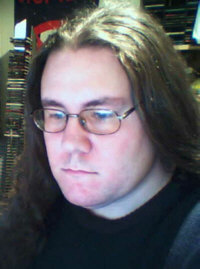 Libertine was a regular member of the chanchan IRC channel, and also possibly the biggest poster on the boards. He tended to be either the first, or thereabouts, person to comment on a new girl's pictures. He had a habit to comment on several individual pictures at once, much to the chagrin of the other posters. He also seemed to favour younger chanchan posters.

Due to the sheer number of his responses to a camgirl's photo, added with the speed of his response, "in b4 lib" became a meme on the boards for whenever a poster was able to get a message in a new camgirl's thread before Libertine.

Obviously, he was friendly with numerous -chans, all of which were younger than him, although considering he was just under 30 years old, it would be hard to be the same age or older than him.

These included Curly-chan, Raichu, Up-chan, Meow Mix, Reich-chan, etc. Amusingly, he would always fully immerse himself in the fandom that the girl he was currently grooming enjoyed, for instance, his sudden obsession with Pokemon while trying to get Raichu to fall in love with him.

One noteworthy mention belongs to Sharpie-chan, who he worshipped. It's disputed as to if she lied about her age herself, or if Libertine told her to do it (she claims to be 19, however her MySpace account showed 16).

He considered one of the old global mods Keiri to be a threat to him. Keiri has pointed out that even though she is the one who vocalises her disgust for him, global mod Nico is actually the one who should get the credit for any actions taken against him.

His friendship with Raichu was supposedly ended when Raichu found what Nico was saying to be true. In reality they continued their relationship for a long time afterwards. At some point near the mid-end of summer their relationship seemed to become volatile with Libertine stalking Raichu on her chanchan imageboard. Libertine would also constantly start massive threads of Raichu's pictures, posting all that he could as fast as he could, on every imageboard site he used (mostly 12chan and other smaller, pedophile filled, boards). The current status of their relationship is unknown.

It was a commonly known fact that Libertine was attracted to jailbait, as he called it, however, the majority of the channel suspected a little more to this. Certain people did accuse him of being a paedophile, however, the girls he praised constantly were quick to jump to his defence. There was not particulary any proof other than the constant grooming of girls who came to Stickam, and the constant comments about girls who looked underage.

Note that ??? at the end of the file name means it was not fully visible.

Later that evening, Nico confronted Libertine with these file names in the IRC channel, in front of everybody who was active at the time.

Libertine did not return to the channel for a number of hours after Christi kicked him, however, approximatly two hours after being kicked, he contacted Raichu on MSN, saying:

"Yes, I did record that video. As I was doing so, a former "friend" from another forum sent me a rar-file and said I might like it. I unpacked the file, and that's what was in it, that's why the window is in the video. Needless to say, I deleted the files -and- blocked him from my MSN list. You can believe me or not, but I'm -not- a fucking pedophile."

Approximately another hour later, this was repeated in the IRC channel, however, it seems apparent that very few people, if any, believed him. This was also put on Sharpie-chan's board, in the thread (Sharpie-chan mentioned she liked CP in that thread) the video came from, where very few people believed him.

Libertine had constantly courted being banned from chanchan, eventually, this came to a head, where nanaki decided to offer the IRC channel the chance to vote for Libertine to be banned.

Thankfully, sense prevailed, and Libertine was banned from the IRC channel.

Around the last week of April 2009, Libertine appeared once more with a new e-girlfriend. This time the girl was Dotchan. Attempting to conceal his past history with chanchan, he was using the name Humbert, to keep from getting banned on sight.

He tried fairly hard, after he was discovered, to pretend he was not Libertine. After proof was posted (a link to this article) he admitted he was Libertine but tried to pretend, to the end, that he was not what this article, and every person he's dealt with, says he is.

In some of his posts he was pretending as though Dotchan wished he was actually a 40 year old pedophile, instead of a pedophile in his late 30s, as if that actually mattered to his being a pedophile.

He scared off Dotchan from posting with his pedophile power (threats and other emotional attacks) and continued to deny that he was a pedophile. These things, along with his starting to post his disgusting thoughts in other threads once more, got him re-banned from chanchan on 2009/05/05.

Be wary of people contacting you from this info: