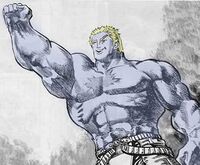 Slipshine is a subscription-only adult website that hosts a variety of erotic webcomics created by several American artists.[1] The owners signed month-long contract with moot to run their ads in the 728x90 banner slot right above the page jump box, replacing J-List as one of 4chan's main sponsors. J-List, while rarely patronized by denizens of the worksafe boards, was widely liked for having rather humorous, relatable and interesting banners, most famously advertising Nice boat, Haruhi (with heterochromia like Suiseiseki) and an Oppai Ball with the description, "Life-like texture. ;_;". Slipshine's ads were poorly received at first, especially on /a/ where there is considerable prejudice against Western authors with a Western artstyle, particularly if they try to pass off their work as anime or anime-influenced. As with J-List, concerns were also raised about the suggestive, risque nature of the ads, which unabashedly depicted consensual sexual intercourse (much to the disgust of /a/, which believes in rape as the only way to have sex) on the worksafe boards.

Slipshine became a lot more notorious when a new ad appeared around mid-February, featuring a muscular, naked purple man with a sparkling smile. The text on this banner, almost as if addressing what the non-existant female Anonymous of 4chan would think after seeing other ads like "Dr. Volupta", read: "Did we mention we have stuff the ladies might like as well??" followed by "(For instance, PENISES)". While the statements of the "Gay Purple Man" are actually quite ambiguous, the clear, horrifying implication to most Anonymous was yaoi. Ironically, in the actual comic the Gay Purple Man appears in (Poly P Comix #2, by Tim Fischer) he's very straight and rapes the main character. Nevertheless, the gay undertones caused an outcry of shock when the banners first circulated. moot addressed the complaints that very day by posting an abridged text log from one of his IRC chats that mentioned he was also displeased with the banner's content and would not be renewing the contract with Slipshine come the end of the month.

Sure enough, on 02 March 2008 the banners disappeared. But in a stark contrast to the initial feelings of disgusting and repulsion, the worksafe boards (especially /v/ and /a/) moaned the passing of the lolworthy banners, which had grown on many Anonymous and were now well-liked, with several Anonymous sheepishly admitting they clicked them. The mourning resulted in farewell topics posted simultaneously on the three largest worksafe boards (/a/, /v/, and /co/) and /cm/, with shoops of the Gay Purple Man appearing within minutes, signifying how admired he was.[2][3][4] There was much lamenting all around long into the night.