Difference between revisions of "The Muppet Show" 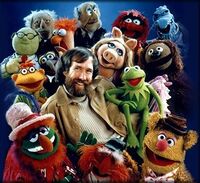 The Muppet Show was a TV show that ran in America between 1976 and 1980, created by Jim Henson and his merry band. It had hand puppets called "muppets" doing skits, and often including celebrities.

The Statler and Waldorf Invasion of 07 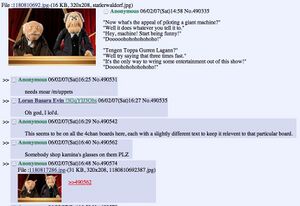 Statler and Waldorf comment on mecha shows in /m/

Statler and Waldorf are two old geezers who would sit in the box and offer their own comments on the show as each episode ended. Overdose video here

The Newfag Summer of 2007 had a horrible impact on the quality of the 4chan image boards. Right in the thick of it, though, there was a moment of reprieve. One day (it was probably June 2nd 2007), an Anonymous went across all the image boards and created Statler and Waldorf dialogues relevant to the board at hand. As the best kinds of trolls - they are funny and hate everything equally, even what they do themselves - they were embraced in a childhood-rekindling sweaty hug. Other Anonymice improved, destroyed, created new and recycled old dialogues.

The key to writing a good Statler and Waldorf dialogue lies in customization and characterization. Replacing "this [edition of the Muppet] show" with "topic A" in a dialogue lifted straight from The Muppet Show can work, but this often gets old or falls completely flat. Taking a true characteristic of "topic A" and having Statler and Waldorf use it to put it - and themselves - down *might* be funnier.

"Gurren-Lagann is off to a really fast start"
"Good, maybe it will end quicker!"
"Dooooohohohohohoho!"

"Tengen Toppa Gurren-Lagann?"
"Well try saying that three times fast."
"It's the only way to wring some entertainment out of this show!"
"Doooohohohohohoho!"

"Wow, there's some stupid stuff going on over there!"
"Speaking of stupid, did you happen to watch RahXephon? They used song to disintegrate stuff!"
"Well, what's so strange about that? They've been doing that on American Idol for years!"
"Dooooohohohohoho!"

"Now what's the appeal of piloting a giant machine?"
"Well it does whatever you tell it to."
"Hey, machine! Start being funny!"
"Dooooohohohohohoho!"

"Just when you think a thread on /a/ is terrible, something wonderful happens"
"What happens?"
"404!"
"Doooooooohohohoho!"

"You know, /a/ really improves with age"
"Why? Because the jokes get better?"
"No, because my eyesight gets worse!"
"Doooooooohohohohoh!"

"So I saw Higurashi. Imagine being stuck in the 80s for the rest of your life."
"Yeah, I know the feeling."
"Dooooohohohohoho!"
"....."
"In any case it was an emotional experience."
"Now, there's a show that makes you suffer with its characters."
"Yeah, too bad they only had to face medieval torture. We had to watch them try to be funny."
"They were trying to be funny? Why does nobody tell me these things?"

>>4011389
>This Statler and Waldorf thing never gets old
"Are you kidding? This was old in the Roosevelt years!"
"Yeah, Teddy Roosevelt!"
"Dooohohohoho!"