Difference between revisions of "Tsukihime" 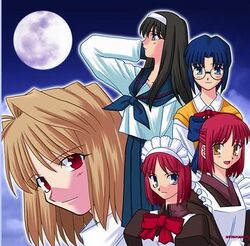 An immensely popular and famous visual novel and H-game by TYPE-MOON productions, written by Kinoko Nasu. Follows the story of a young man named Shiki Tohno, who has the ability to percieve the "death" of practically anything and everything. The game contains five seperate story arcs, each with two different endings, though the fifth and final arc have only one ending. While beloved since the advent of /a/ and /b/, Tsukihime entered the hearts of a new generation of Anonymous following Mirror-Moon's release of an English patch to the game in November 2006. Since Tsukihime is an out-of-print doujin, it's probably one of the more legal (or less illegal) games available to Anonymous online. Throughout its long history, Tsukihime has spawned a vast quantity of memes. The fighting game Melty Blood, which is based after Tsukihime, is also discussed.

A CAT IS FINE TOO 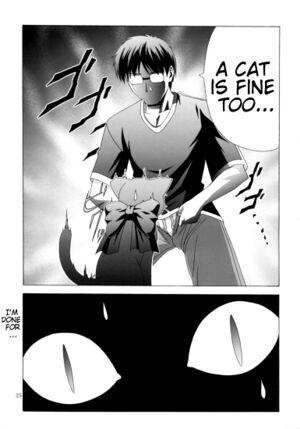 A cat seems to be fine as well.

From a Tsukihime doujin in which the main character Shiki Tohno decides to rape his succubus familiar, Ren.[1] To escape from being raped Ren turns herself into a cat; however, Shiki is undeterred and utters the line in question while unzipping his pants. Pops up in many Tsukihime or cat-related threads, and like many memes it gets altered to fit other threads as well ("A SAGE IS FINE TOO", etc). Sometimes typed vertically, especially on /b/.

A riddle: What is represented by the following words: "Curry" "Ass". Shiki's insight in the physiology of digestion is surely impressive, but "shit" was not the answer we were looking for. Those who have played Tsukihime knows what the real answer should have been.

Meme originating from a doujinshi made by the famous doujin circle Crazy Clover Club, based on Tsukihime. In the doujinshi, Satsuki Yumizuka, nicknamed "Sacchin," sings a little song about how she doesn't have a route of her own in the game, and ends with "Isn't it sad, Sacchin?", usually replied to with the emoticon ;_;. This has become a standard response to any posts or threads containing Sacchin, although the "Isn't it sad" meme is reasonably widely applied throughout /a/. RahXephon fans have been seen adapting the meme to Sayoko Nanamori, a secondary cast member from the series with a similarly depressing fate. The RahXephon adaptation was blown out of the water by Pimp Sacchin, who does not seem sad at all.

There is no Tsukihime Anime

An occasional protest against the inability of the Tsukihime anime adaption to satisfactorily recreate the entire game in 12 episodes. Commonly cited reasons in the anime are missing or "watered down" fight scenes, character redesigns (most notably the Akiha DVD cover), and explanation being left out of the last scene. This denial of the anime's existence was almost guaranteed to kick up a shitstorm at any given day as other fans, particularly fans of Arcueid - whose route was featured in the anime - come to its defense. At least it isn't yet another power level discussion. However, the official manga follows the anime's plot (Arcueid's route) and it is more loved by /a/ as they see the story setup could be ideally worked into a much better Tsukihime anime.

Old meme the came from numerous TYPE-MOON communities (circa 2003, when the anime came out) and spread through iichan and eventually found a resting place on 4chan's /a/ and /b/. Refers to the view that no matter how poorly written some of Tsukihime may be, all of its faults can be attributed to the fact that the plot is little more than an accessory to the sex. In recent usage, the term is spammed over and over in a surreal attempt to troll fans of eroges, especially the large TYPE-MOON crowd. Nobody ever explained why porn and plot together should somehow be a bad thing.

This stock response originated from a thread in late 2007 that began with the hypothetical situation of "You wake up as Shiki", followed by the question of "What do you do next?". Given this scenario, one Anonymous quipped "Rape the Maids”. The popularity of this response exploded almost instantaneously, with it being quoted and re-quipped by Anons within the thread and shortly thereafter in others. The following day the entire board was covered in posts that began with "You wake up as..." a certain character, which were met with a variety of responses depending on the character ("You wake up as Darks. What do you do next?" "How can I wake up if I stayed up all night?"), but each hypothetical situation getting at least one "Rape the Maids" response.

"Rape the Maids" has become a stock response to any question regarding what someone’s next course of action should be (Raping the Maids is always, always an option, just like genuflect). Sometimes alternately spelled as "Mape the Raids".

A stock phrase that is accompanied by a picture of Shiki cutting Berserker from Fate/stay night into pieces. The joke comes from various fan theories about how Shiki might not be able to see the lines of death of Fate's Servants as they have separate "rules". Whenever a thread like this occurs, it usually turns into a power level argument. The meme eventually spun off to "Servants can kill Shiki" (a reference to Kohaku) and other variations.

This chair is an ... eyesore? Don't you mean footsore?

One of the more popular Tsukihime memes.[2] In the scene in question, Shiki Tohno accidentally stubs his toe on a chair and goes berserk, smashing the chair to pieces. Other phrases are occasionally repeated in a similar manner.

First appeared on /jp/ in a Tsukihime copypasta involving major antagonist Roa raping the denim-covered ass of supporting heroine Aoko Aozaki. Said by Roa, who did so in frustration that Aoko didn't immediately consider giving him a hair-job while being forced to suck him off. It became relatively popular due to the apparent ability to make one burst out laughing right in the middle of fapping since the action was so sudden and ridiculous, and it is posted around 50% of the time in threads that heavily involve Roa, Aoko, or both, usually spurring someone to post the copypasta in its entirety. Still, despite its mild success, the original author has apparently left the copypasta incomplete, much to the chagrin of everyone who's enjoyed it.