Difference between revisions of "Tsundere" 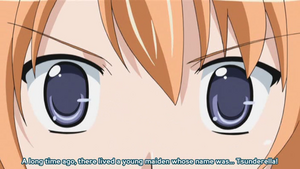 Tsundere's have become so common in anime that the characters themselves are becoming aware of it.

The term “tsundere” (pronounced as “soon-dare-ay”, the “tsu” being like “tsunami”) is not so much a meme in and of itself as it is an unusual term you’re going to need to be familiar with before you can browse /a/.

A tsundere is one of several character archetypes (or stereotypes, as some view them) common to anime and manga, usually specific to female characters. A “tsundere” is a girl who initially displays a combative, angry, ill-tempered, possibly violent or generally mean nature towards the person she has affections for, or that has romantic feelings directed at her. This is commonly exemplified with things like insulting, patronizing, complaining about or having angry outbursts against whichever character they have romantic tension with, but later as they come to terms with how they feel, the mean façade dissolves into a more loving, gentle, honest and affectionate disposition. 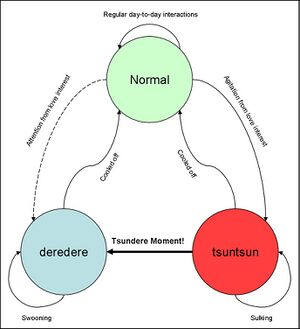 A chart showing the basic behavioral patterns of the tsundere.

In the midst of their angry disposition, they may hint at their kind, affectionate nature but overshadow or conceal it with meanness (“You forgot your lunch again today? Jeez, you’re such an idiot! How many times this week is that?! …..Well, if you’re too much of an idiot to bring your own lunch, I guess I wouldn’t mind making one for you each day. Don’t get any wrong ideas! It’s not that I like you or anything! It’s…it’s just you’re too dumb too remember it yourself, and I can’t let you starve. Be grateful…”) 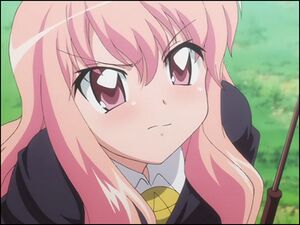 The way such characters misrepresent their feelings of love towards another character as meanness or anger and being unwilling to accept the fact they have affections for another character points to an immature nature, as such behavior can be seen in how little kids show their affections for each other (grade-schoolers tend to pick on the person they secretly like). This personality-type may also operate on the mechanic that the harder it is to get, the more you want it. Because of this, the “tsundere” personality is considered highly cute and attractive in characters among the denizens of /a/ and many anime fans in general, with many /a/nonymous having a tsundere waifu (though most Anons fully recognize and admit to the fact that the tsundere factor is only cute in fiction, and is rather unattractive and annoying in real-life). 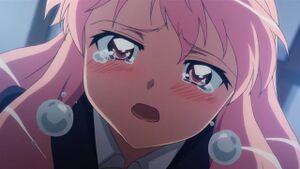 The term “tsundere” came to use through otaku Internet-slang, and is derived from the Japanese terms “Tsuntsun” meaning aloof, pointed, angry or mean, and “Deredere” meaning lovestruck or affectionate. Tsunderes are characterized by their angry and mean façade that eventually collapses into a softer, loving temperament, often with tears. This transition is often characterized by /a/nons as going from “tsun, tsun” to “dere, dere”, with images of the same character’s conflicting natures often being placed side by side. These have also been described as going from “tsunbitch” to “dere dere-mode”. Though it’s not invariable, the twin-tails hair-style is often associated with tsunderes. /a/ has also described characters, or even itself, as being capable of tsundere-like behavior. For example, /a/’s on the surface word-of-mouth hatred for Lucky Star conflicting with its denizens’ apparent love for the series has lead many to describe /a/ as being “Tsundere for Lucky Star”. 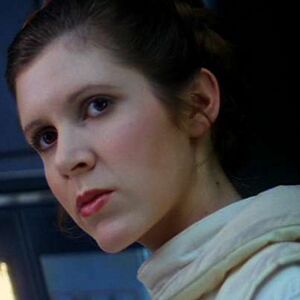 The first ever tsundere.

Many view Naru from the manga and less impressive anime Love Hina as the original archetype for the modern tsundere, though many argue “Naru’s not tsundere, she’s just a bitch”. More agreed upon examples include Rin from Fate/stay night, Shana from Shakugan no Shana, Nagi from Hayate the Combat Butler, Akane from Ranma ½, Louise from Zero No Tsukaima, and possibly even Suiseiseki from Rozen Maiden. Haruhi from The Melancholy of Haruhi Suzumiya and Kagami from Lucky Star have both been argued to be tsunderes, but many claim there simply isn’t enough evidence to make them fit the bill. It can be argued that the “tsundere” archetype is nothing new or even specific to anime with many claiming the first real tsundere to be Katherina from Shakespeare’s The Taming of the Shrew or that characters like Helga Patacky from Hey Arnold! fit the tsundere-mold 100%.

Another regularly seen archetype from girls in anime and manga is the Yandere (with similar terminology derivatives); a female character who’s initially kind, loving or otherwise normal but is later revealed to be dangerous, unstable or psychotic.