Did someone just say "Weeaboo"? 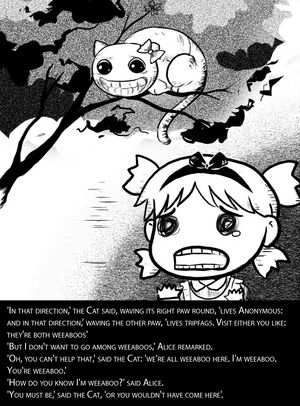 Weeaboo, also seen misspelled as Weaboo, is a synonym for "Wapanese", which in turn means "wannabe Japanese" and/or "white Japanese" (in line with the more mainstream term "wigger[1]"). It stems from an old wordfilter to that effect in /b/. The word itself comes from an issue of the (web-) comic The Perry Bible Fellowship, wherein it means something else (and more to the point, nothing in particular), but a single panel from the strip in question[2] is still considered synonymous with the meaning it has on 4chan.

"Wapanese" itself is a derogatory term for an American or European (usually white) who is obsessed with Japan to the point of wishing to be Japanese. Wapanese typically make statements about the superiority of Japanese culture to their own, that Japanese women are more attractive than anyone else, etc., and thus deserve scorn due to how annoying and ignorantly derisive cultural cringe suck up these tirades are. The term is often used on 4chan when a moderator deletes fanart made by Americans or of American characters. "Weeaboo" has since taken on a life of its own, and is used by /b/tards who don't watch or like anime to taunt /b/tards who make more than passing mention of it, even if they're not obsessive otaku. "Weeaboo" has almost completely eclipsed "Wapanese" on 4chan, the latter is rarely used anymore.

It is usually seen as a grave insult, but then again it is often pointed out that anyone browsing 4chan qualifies as a weeaboo by default (especially on /a/). In essence, it's used derogatory for someone who does not adhere to 4chan's usual negative stance towards using random Japanese terms and emoticons for no good reason, and who is thus "more weeaboo" or at least more openly weeaboo than the usual 4chan user.

Weeaboos coming from other sites on the internet are inevitable visitors, as 4chan is essentially inspired from the place known as 2ch, and whose founders have a liking for anime that thus attracted many fans in the first place. Nevertheless, their behaviors and lack of proper chan etiquette are intolerable and embarrassing at best, no matter how immature to "mature", and thus, either need to lurk more or return whence they came.

Since its inception, the term "Weeaboo" has been used in a more distorted way to its original meaning. 4channers on any non-anime orientated boards will often use "Weeaboo" as an insult for liking anything remotely Japanese as opposed to being reserved solely for those who are utterly obsessed with Japan. If you are on the receiving end of this word, fortunately, the people who openly use this are quite often faggots themselves, unless you are being a faggot in the first place..