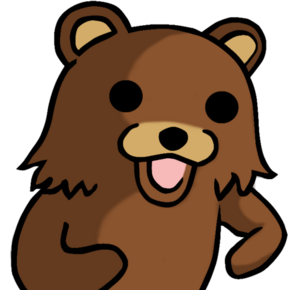 Pedobear is an ASCII art creature. This one, predictably, looks like a bear and is often sighted with loli. Spawned the Pedo Bear Seal of Approval, shopped from old Nintendo games. Originally Kuma from 2ch, who is not a pedophile at all, is a nature lover, and supposedly hates Ronald McDonald.

A few users started an in-joke whereby one would post Osakaphone saying something, and the other would post Kuma with a response. As the posts began getting more and more sexually oriented, paired with the innocence and widely-held immaturity of Osaka, led some to dub Kuma as being "pedo" for her. Pedobear is used in conjunction with pictures of underage girls.