From lurkmore wiki
Jump to navigationJump to search
4chan 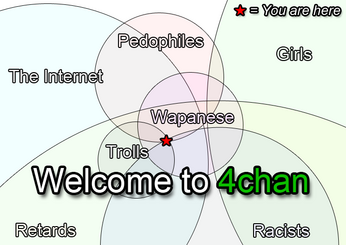 The contents of 4chan.

4chan is the original home to anonymous everywhere. Despite the splitting off and new factions like 7chan, 4chan is the place where all of this madness originated and where the magic started. Unfortunately, due to moot's ever constant dumbfuckery and the events surrounding it, 4chan is officially dead as of the start of 2015.

First seen in a MS Paint comic. Anonymous answers his door after the person knocking claims it's the "4chan Party Van", but unfortunately it turns out to be the FBI, who proceed to exclaim "LOL J/K" and beat up Anonymous.

Don't mess with football is a meme originating from a press conference quote after an Anonymous posted a bomb threat on 4chan and was arrested by the FBI.