Difference between revisions of "ARCADE BUMSTEAD" 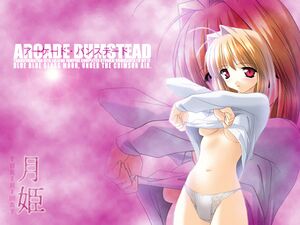 A character named Arcueid Brunestud. In a "Goofus and Gallant" parody (wrong and right) in 4chan /w/, the wallpaper page. One of Goofus's wallpapers was a picture of her with the words: "YO DIS B ARCADE BUMSTEAD FROM TSUKIHIMAY I'D HIT IT."

A further bastardization of Arcueid Brunestud, from Porkslope Turkeyhandle. The original topic was first stickied and then locked; the moderator who did this claimed that the thread was "Pure /b/", and it had been locked to prevent other /b/tards from tainting it. Variants of it are commonly used by /b/tards as wildcard images.