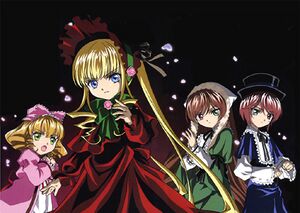 Not creepy at all.

By far THE MOST POPULAR anime on 4chan, especially in /b/. Even newfags can recognize this anime by the amount of DESU that gets posted on /b/ every so often. Rozen Maiden is a story about a bunch of dolls created by a dollmaker named Rozen, who made them fight each other in the "Alice Game" in the strive for the perfect doll, or "Alice". When Jun, a hikkikomori, stumbles across an Internet bid, he mistakenly signs a contract that offers him one of the dolls to take care of. When Shinku awakens from the box and attracts the attention of the nearby doll Hinaichgo, the Alice Game begins once again.

While it's the most well-known anime on 4chan, Rozen Maiden isn't necessarily a FAVOURITE among Anonymous since its incursion of it's own popularity backlash. /a/ used to be flooded with doll threads, but now almost every thread is saged or turns into a generic breakout between Stinku and Junk. Desu [floods] is [are] hated by all boards outside of /b/ due to its overuse and annoyance. The creation of www.desuchan.net helped alleviate the amount of doll threads on 4chan therefore making it more accessible. Peach Pit, the creators of Rozen Maiden, also copped out on the series, abandoning hopes on a conclusive third season. Rozen Maiden's future is in blight.

Minor /a/ meme relating to the special OVA Rozen Maiden Ouvertüre. Widely considered to end in an anti-climatic manner, many /a/nonymous feel that the OVA failed to live up the the accumulated hype prior to its release. Hence, "Ouverhÿpe."

Given the insane popularity of Suiseiseki (Boatlights) it's not surprising that other Rozen Maiden dolls have gained niches for themselves. Souseiseki, the tomboyish twin sister of Boatlights, has been dubbed "Boku" and gained a following for herself. The name originates from her tendency to use the word "Boku", which means "I" or "My" but is usually said by boys.

The nickname given to Souseiseki. Originally, this was a picture of a boat with two lights, the left green and right red, and a mouth and speech bubble containing the word "DESU" repeated photoshopped onto it. This image mistook Souseiseki for Suiseiseki, as both have heterochromic eyes, though this error is rarely pointed out. Since then, Souseiseki has become a meme along with Suiseiseki.

The nickname for Suiseiseki, who inspired the Desu meme. She says it extremely frequently as a catchphrase; she is often simply called DESU because her name is difficult for some people to spell. DESU is often a spam reply when an unwitting newcomer asks for the definition; this was probably inspired by the Dan Kim web comic where she constantly repeats desu.

Junk
Affectionate nickname for Suigintou. The origin of the name is featured in the second episode of Ouvertüre.
Suigintou is the main antagonist of Rozen Maiden, and a lot of her aggressive, spiteful or cruel actions can be traced back to or found to be rooted in her underlying inferiority complex. As dolls, the Rozen Maidens are terrified of the idea of becoming a useless pile of junk. Thusly, Shinku commonly uses it as an insult against Suigintou during their various times engaged in combat against each other.

Kanada
Affectionate nickname for Kanaria, the most intelligent of all Rozen Maidens! Source is the first sub's translation of Shinku trying to remember her name (subsequent subtitles say Kanabu, which is correct but who really cares about that?).

Stinku
Affectionate nickname for Shinku, the main doll of the show. Everybody hates her due to her own selfishness and heartless actions.