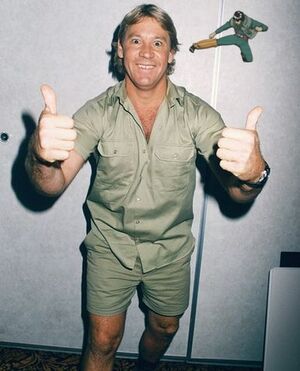 Steve giving a thumbs up

The Crocodile Hunter, who was beloved by /b/tards even though he was never posted there. When he died on September 4, 2006, a memorial sticky was created for him and it broke several records as being the longest thread in /b/, with a staggering 5000 posts, and not being deleted for almost 7 days. A swf was also posted for the thread with the song "Forever Rachel" from the game Final Fantasy VI. During this time Black_Knight lobbied the idea that Steve Irwin should be an honorary meme for his services in insanity. Amazingly the consensus was for it and Steve Irwin became the first meme to not go through the normal process.

Irwin-based outfits also became an alternative to the standard Nigra in Habbo Hotel raids, as Habbo mods began to ban Nigras on sight and also because in addition to AIDS, it was discovered that the Habbo pools contained stingrays.

On other 4chan boards, the response was more tepid with photoshops of Steve Irwin being impaled by a stingray or various sharp objects, and GIFs of him being killed in a Pokemon battle setting by a Mantine (the closest Pokemon to a Stingray).

Steve Irwin has returned to obscurity for /b/ and the rest of the internets.