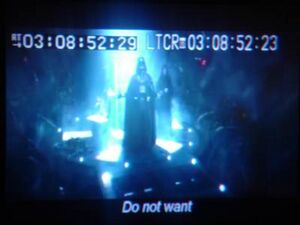 I don't think he wants.

DO NOT WANT is an indication that the poster does not like the subject of the thread. The phrase is often found around camwhores, guro, scat, and other unpleasant and unfunny things. It was acquired from a bootleg camcorder Hong Kong subtitling of the Chinese dub of Star Wars Episode III, in which Darth Vader's much-maligned "NO!" scream is translated to Chinese and then back to English as "Do not want".

A popular variation of DO NOT WANT is an image macro of an Akita Inu being presented with a plate full of broccoli.

The DO NOT WANT meme has also spawned responses of DO WANT, typically to images of hot females.