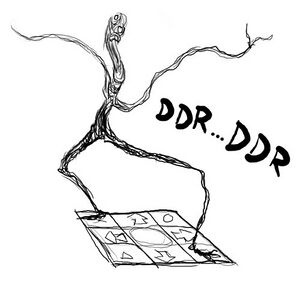 This hole was made for me

This meme originated from a short story called The Enigma of the Amigara Fault, found in the manga Gyo, by famous horror manga artist Junji Ito. The story is about two teenagers who visit the place where a huge fault in the ground has been discovered after an earthquake. The walls of the fault are full with human shaped holes which seem to attract some people in a strange way. One after another, the people climb into "their" holes when they can't resist the temptation any more. The holes are in fact tunnels, which are shaped after the exact silhouette's of certain individuals. The people trapped in them can only go forward without being able to turn back. As they proceed further into the tunnel, the walls close in and deform the people over a long period of time. In the final page of the short story, we see two scientists investigating the other side of the holes (which aren't human shaped at all anymore). They look into one hole and see a horrible deformed and crushed (and maybe dead) creature coming at them, along with the famous DRR DRR DRR noise.

Anonymous, being the wiseass he is, created a shop of the creature dancing on a Dance Dance Revolution pad.