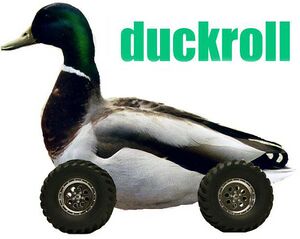 All roads lead to Duckroll.

A delightful trap (in the literal sense) in which someone starts a Duckroll thread and then inserts links to it in other threads, as if those links are quotes from posts earlier up in the thread. This causes victims to unintentionally end up at the Duckroll thread, often confused and angry. To troll /b/ in this fashion is sometimes called duckrolling. If a user is duckrolled, then the user is "required" to post a duckroll link in another thread.

Duckroll first appeared in /b/ in mid-November 2006, where to many people's surprise, Duckroll took off and became very successful because /b/ took much glee in duckrolling each other.

Duckroll has evolved as well, with a /v/ spinoff called Psyduckroll (wheels on a Pokémon called Psyduck) and YouTube videos that are comprised solely of a stillshot of Duckroll[1]. This in turn lead to Rickroll, /v/'s official answer to Duckroll, and from there to hybrid YouTube videos that combine a Duckroll still shot with Rickroll music (sometimes with Rick Astley's face also shooped onto the Duckroll image[2][3], or with other images like Mukroll[4], another Pokémon-based variant). Some have dubbed this development "Dickroll".

A Greasemonkey script[5] that flags duckroll links with the text "[duckroll]". Often posted in Duckroll threads. 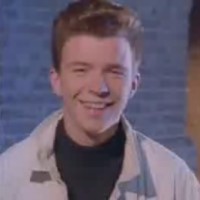 Here's a song by a gay guy.

Posting links to videogame-related (or not) YouTube videos is very popular on /v/. On March 29th 2007, there were s large number of threads discussing about the recently-released GTA4 trailer. A mischievous Anonymous posted a YouTube link to what he described as a "GTA4 gameplay vid". At the time there was much speculation surrounding the new GTA installment, so the link drew a large amount of curiosity, curiosity that was quickly squashed upon finding that the YouTube link actually directed users to the music video of "Never Gonna Give You Up" by Rick Astley. Many /v/irgins shat bricks when they found a skinny white boy singing like a black man instead of anything even remotely videogame related, and cries of "ONDORE!" soon echoed within the commentary of that particular video. The residents of /v/ found this hilariously absurd, and soon enough, Anonymous stealthily inserted links to this video in many threads on /v/, resulting in much hilarity when other posters get a vintage 80's surprise. Due to the fact that this meme relies on cunning deception much like Duckroll, the practice of tricking people into viewing this song is called the Rickroll, trolls who do it are called Rickrollers, those who fall for it exclaim they've been 'rickrolled,' etc. etc. etc. It soon leaked over to /x/, and then to the rest of 4chan.

The most common video used to Rickroll is the 'Never Gonna Give You Up" music video, and they have also started to link to other Rick Astley songs, such as "Take Me to Your Heart."

Since Rickroll has been used on Seth MacFarlane's cartoon Family Guy AND the Carson Daly show, it is now an old and tired meme.

It should also be noted that YouTube Rickrolls have been posted so often in gamefaqs, their TOS has been amended in which posting a YouTube video with Rick Astley's song "Never Gonna Give You Up" is now a violation with the note being, we shit you not, "Posting a RickRoll? That's a paddlin'."

Rickroll became mainstream on Thanksgiving Day 2008, when Rick Astley, having bowed to the inevitable, performed "Never Gonna Give You Up" during the Macy's Thanksgiving Day Parade, thus Rickrolling the entire United States on live televison(and whatever other countries that were watching the coverage).