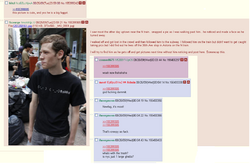 moot trolling at some bullshit awards - "trolling is a art"

Frequent jokes, especially when donation drives (DONATE OR DIE 2005) are active, have been made about moot taking all the money for himself and fleeing to Mexico. As a result, Mexico is now known as mootxico.

How can you bitch about something you can't see?

moot's words when he made /b/'s images and text invisible for the day.

He is represented in 3 forms:

Real Moot was first seen at the 4chan Otakon Panel in 2005. His relatively non-nerd appearance surprised and confused 4channers, some even thinking it was a hoax.

Real Moot's identity was revealed by The Wall Street Journal in a July 9, 2008 article to be Christopher Poole, and was confirmed to be so later in 2010 by numerous other articles from different sources, most notably CNN.

On September 17th, 2014, war was beginning. On this day, various threads in 4chan related to the video game industry shitfest known as #GamerGate were suddenly being deleted by mods en masse. To further complicate things, 4chan's feedback page was utterly gutted due to large influxes of traffic in wake of this, as was moot's contact email on all pages, and the entire nation of Germany was IP banned from even coming to 4chan. To further compound things, this suddenly happened without any warning or notice at a second's passing.

It would soon be learned that moot and his crew of cronies would have fallen into the highest hierarchy of Moral Faggotry ever achieved regarding the affairs of #GamerGate; not only having attended live and well documented with his real name in person with extremist Feminist string puller and manipulative exploitation queen Anita "Kardashian" Sarkeesian at a convention panel detailing her affairs in the video game world, but being also promised the favor of sex by Gawker writer Mallory Blair Greitzer if he had joined their ranks and performed as according to their agenda.

moot's plan was simple: Knowing that 4chan's spread of information was highly transmittable, volatile, and unregulated by itself, he would enact his moderators and administrators to go code red on anything GamerGate and Anti-Zoe Quinn; should they not, he would fire them immediately. Also knowing that GamerGate info's hotspot was that of /v/, he would ensure that all sights be set on /v/ denizens and their posts frequently. Furthermore, anyone that was Anti-Zoe Quinn were to be administered immediate permabans to ensure that their info would never come to be leaked onto 4chan ever again. On the outside of things, moot and other moderators that weren't busy with the chan were to hack and dox various key members of the resisting movement against the pro-slut fucking ladder based and nepotistic cabalistic syndicate like video game journalism industry.

Much to his dumbfounded surprise in the face of human unpredictability and underestimating his userbase, moot was given one of his largest waves of backlash ever given in the history of chans; not only did his fired mods leak out info on his plans and agenda, but all of 4chan's userbase declared 4chan dead and sold out upon its eleventh aniversary, and a mass migration to 8chan was largely suggested. This got to be so bad that moot was to enforce ban filters against posters constantly spamming the order to make the mass migration in the face of moot's shithead actions, which did very little in light of that.

By the new year of 2015, the damage had already been done. Not only did moot's respect went down the toilet faster than a dysentery infected pile of fecal matter, but his promise of sex by Mallory was all just a big lie; she actually fucked hundreds of other guys during a nice vacation to Europe, and this included the founder of Tumblr. Thus, by January 21st, moot immediately declared his resignation as head of 4chan.

In short, good night, sweet emperor. May your totalitarian censorship dumbfuckery find its rightful place in a 6 foot hole in the ground and forever unmarked with pretty flowers and grass as we irrigate it with our saliva and urine.