The most hardcore of hedgehogs.

4chan's /v/ board has particular disdain for newer Sonic the Hedgehog games and the furfaggotry that they inspire. Consequently, Anonymous regularly starts threads dedicated to the finding (and occasionally fabrication) of hilarious Sonic ORIGINAL CHARACTERS (© 2007 DON'T STEAL) and sprite comic strips.

One day, Razor the Hedgehog appeared in one of these threads. The strip was entitled The Legend of Razor and the author was named Cody Carter. 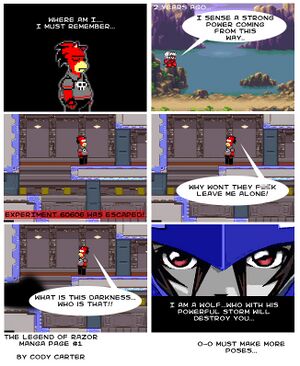 When page 1 of the Legend of Razor 'manga' was first posted, Anonymous could hardly believe his eyes. It had absolutely everything /v/ loves to laugh at Sonic fan-children for; horrible edited sprites, poorly conceived crossovers, DARK AND SERIOUS themes, self-censorship, and the poorest writing this side of Doom: Repercussions of Evil.

While everyone in the thread immediately went batshit crazy with cries of 'SAUCE' and 'MOAR', some amongst them simply couldn't believe it. Razor was too good to be true. The fact that his 'badass' sprite is clearly and laughably based off Homer Simpson was the main cause for Anonymous' skepticism. The original poster of the comic only posted once more in the thread: To post a biography of Razor, which hilariously stated that he was a member of the Teen Titans, and that he was happy with Raven until 'Shadow raped her.'

After that, Razor Anonymous made no other posts identifiable as himself for a long time, despite the frequent repostings of page 1 of the Legend of Razor in Sonic threads. 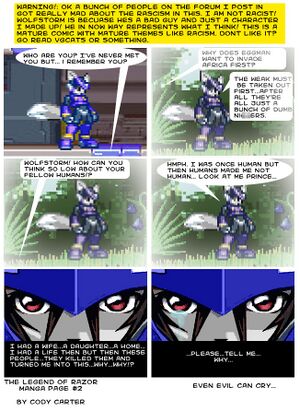 Several months after Razor's initial debut on /v/, page 2 popped up in another Sonic thread. This page immediately proved popular with Anonymous, falling in line hilariously well with other sprite comic cliches, such as disclaimers for unnecessarily "hardcore" content, and bad guys with a horribly cliched story about why they became evil in the first place. Since it didn't feature the altered Homer sprite, newfags who hadn't seen the original strip found it easy to believe that somewhere out there, beyond the reach of simple Google searching, Razor's legend could be found in full online.

Shortly after page 2 was posted, another thread was started featuring pages 44, 45, 46 and 47 of The Legend of Razor. These pages covered, much to Anonymous' delight, the story arc that Razor's original biography had alluded to; the one in which he joins the Teen Titans and hooks up with Raven shortly before Shadow rapes her. By this point, most /v/irgins had figured out that Razor was, in fact, a masterful creation of a very witty (and very convincing) Anonymous, who truly had a grasp on what makes sprite comics drawn by 13-year-olds hilarious. Threads pleading for the sauce gradually transformed into threads pleading the original Anon, whoever he was, to make more of the strips for /v/'s amusement.

Since then, Razor has become something of a Newfag Detector on /v/; simply post one of the comics in an ORIGINAL CHARACTERS thread and see how many people call out for the sauce. Also, thanks to page 44 of the comic, "time to hit the showers" has become something of a meme in and of itself, with many /v/irgins posting pictures of Cyborg from Teen Titans or pictures of shower heads in various threads on the board.