The Rules of the Internet are many and complex. As the years have past, it has been proven that many of them can be broken, and so, the list has never updated since.

Rules of the Internet 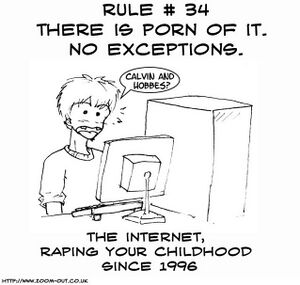 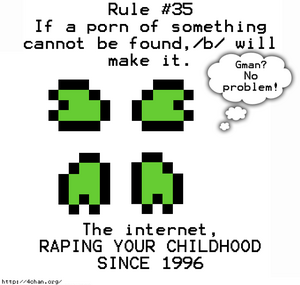 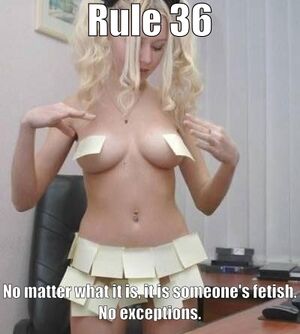 This is someone's fetish because it exists.

A macro of a woman covered in sticky notes with the text "No matter what it is, it is someone's fetish. No exceptions."

Rule 37 tells us that there are no girls on the Internet. 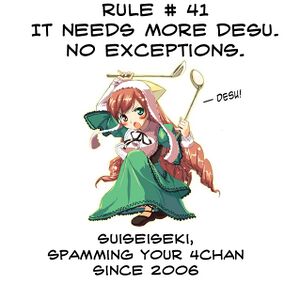 Rule 41 as seen on that fateful day

From an image posted in /b/ in which Suiseiseki, a main character in the anime Rozen Maiden who adds the meaningless word "Desu" to the end of virtually every sentence, states that the thread "Needs more Desu, no exceptions" followed by "Suiseiseki, spamming your 4chan since 2006". This image is often followed by the spamming of "Desu" over and over again. 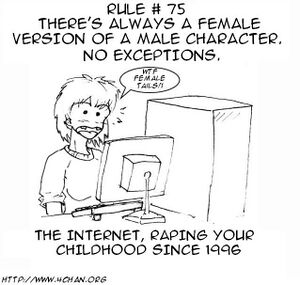 Rule 75 is another macro rule stating that "There's always a female version of a male character. No exceptions." 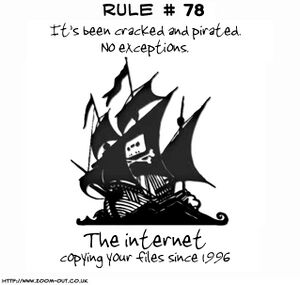 Another macro using The Pirate Bay in the reference to "It's been cracked and pirated. No exceptions." This rule is actually the closest to the truth than any of the other rules.

Me will crush you. Crush you to goo.

An /a/ddition to /b/'s Rules of the Internet. Originally appeared shortly after a topic about "Rule 757" (Every anime ever made has an AMV out there to a Linkin Park song. No exceptions.) was posted, originally called Rule 810. Considered a rule since no matter how much hax any anime character will have, that character can never compare to the Tengen Toppa Gurren-Lagann, whose size dwarfs the XBox 360 and whose power is beyond maximum.

As is typical of /a/, there have been several discussions regarding Tengen Toppa's status as "the most hax", with some arguing that Giorno Giovanna is actually more powerful because his Stand, "Gold Experience Requiem" basically makes him invincible. Gurren fags acknowledge Giorno's strength, since not only is GER a broken Stand, normal old Gold Experience (which turns anything mechanical organic) is the perfect weapon against Tengen Toppa. Compromises soon occured with the two either sharing the hax crown or alternating, with the creation of a "Rule 82" to go along with Tengen Toppa's Rule 81. The debates were immortalized by an Anonymous fanart of ORT (Angel Notes), Yukaru Yakumo (Touhou) and Son Goku (Dragonball Z), all three infamously hax characters, getting their attacks nullified by Giorno's "Gold Experience Requiem", only to have GER get pierced by the overwhelming power of Tengen Toppa, which sports a grin identical to the smilie faces found at Something Awful. In another (possibly troll) edit of this comic, Tengen Toppa's drill is ineffective, reflecting how the debates as to which of the two is more hax just go back and forth.

Once in a while, these hax discussions attract the attention of the dumber Anonymous of /a/, particularly Tohno/Nanaya Shiki fanboys (or trolls in disguise) who go out of their way to make Shiki cocksucking as obnoxious as possible. Many hax discussions have degenerated into shitstorms when Tohno Shiki fags claim Shiki's hax is superior to both Giorno and TTGL for shitty reasons; these include being able to stab Tengen Toppa's dot with (and sometimes without) use of a spaceship, and defeating GER by killing the concept of "zero", thus nullifying its ability. Though little has been resolved between Gurren and Jojo fags, both fandoms enjoy the loads of lulz from lauging at how stupid Shiki fags are.

Rule 81 - All discussions of power levels will end with the Tengen Toppa Gurren-Lagann.

Rule 82 - All discussions of power levels will begin again with Giorno Giovanna.