Are they still on Namek?

From LURKMORE wiki
(Redirected from Are they still in Soul Society?)
Jump to navigationJump to search 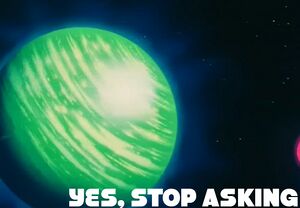 This has become something of a catchphrase for disgruntled Bleach fans who feel the Soul Society arc has gone on for way too long and is becoming a second Namek Saga (a story arc from Dragon Ball Z which also had a large number of episodes). Several 4chan users have expanded this meme to encompass any and all anime that could be perceived as "dragging on", especially any shounen that gets into a so-called tournament arc. In this context, the phrase is interchangeable with "Are they still in Soul Society?"

Unlike most 4chan memes, which are established in /b/ and then "migrate" to other boards, "Are they still on Namek" was born from and is rarely if ever seen outside of /a/, the anime board. It is also worth noting that the moderators began banning users from /a/ for using this meme, presumably because its overuse had dragged it down from a tongue-in-cheek joke to an outright attack against anyone who enjoys the anime in question.

After the last episode of the Soul Society arc aired on the 5th of January 2006, many people posted threads stating that the Namek meme had outstayed its welcome, however, many other users saw fit to draw comparisons between the latest (filler) arc and the Garlic Jr Arc of Dragonball Z. However, this didn't last and the meme slowly disappeared from /a/. However, a related image macro is still used to confirm that an anime (usually Bleach or Naruto) is still in midst of filler episodes. The term made a big comeback with Bleach's Hueco Mundo and Fake Karakura Town arcs, which are even longer than Soul Society, and to make things worse are interrupted by random filler arcs.

Ironically, DBZ's Namek Saga was not actually filler material, but intended as a finale for the series.