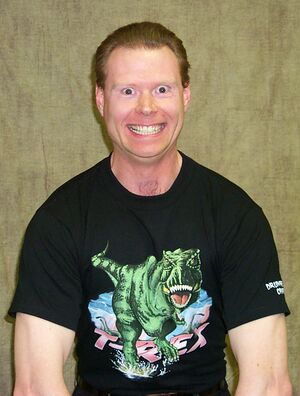 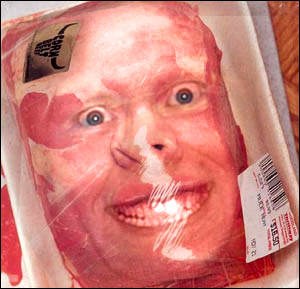 The Cockmongler originates from a photo of a redheaded man modeling his dinosaur T-shirt; hosted on the website for The World's Largest Dinosaur in Drumheller, Alberta. Due to its humorous appearance (stemming from the model's wide, toothy grin and bulging eyes) it was photoshopped into an image macro accordingly; the caption used was "I'll suck your cock", implying that the model was willing to perform fellatio (cock mongling). Ironically his large teeth assured unpleasant results. Despite being one of the older memes (originating from one of 4chan's earlier incarnations, at around June 2004) it is still often seen edited on to all manner of images. Along with Happy Negro, Cockmongler is seen by some, especially on /b/, as one of 4chan's mascots, and image macros involving both of their faces are somewhat common. Cockmongler is one of the oldest and popular memes on 4chan.

An extremely effective troll, in which a picture of Cockmongler, only with the caption 'GRINMAN LIKES TO GRIN' is posted. This is usually accompanied by a n00bish post, like "Who's your favorite 4Chan character? Mine's Grinman!" This tends to anger many /b/tards, and flurries of LURK MOAR and GTFO are posted as replies. Its effectiveness has not diminished at all since its inception in August 2006. However, there are worries that an army of new /b/tards may take this as the true form of Cockmongler, and spread across the entirety of /b/. Older /b/tards fight hard to keep this at bay.

Name given to Cockmongler by fledgling /b/tards who did not lurk sufficiently. Also used by trolls to rile veteran /b/tards, along with White Cat, 404 girl, and various other renamed memes.