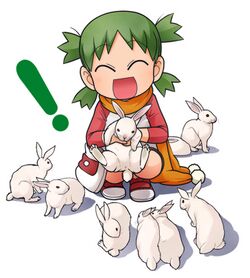 The Japanese name (meaning "four leaves") of not only 4chan, but a myriad of people, fictional and otherwise. The favorite around 4chan is Yotsuba Koiwai from Azuma Kiyohiko's manga Yotsubato. She is a green-haired loli with 4 short pigtails, who is used as one of 4chan's primary mascots (the other being m<3<3t).

A substantial amount of fanart of Yotsuba has been produced for 4chan's error and ban-notification pages[1] (the latter usually also including m<3<3t and/or Anonymous), with a picture being chosen at random each time one of these pages is accessed.

Since its early days, 4chan has been a nucleus for fandoms of unusual or "niche" anime, and the works of Kiyohiko Azuma have always been popular there. While Azumanga Daioh is the most famous of his works, 4chan has always held a soft spot for Yotsuba& and since the main character, Yotsuba, is another way of saying 4chan ("Yotsu" = four, "ba" = "chan" = "leaves") she became 4chan's mascot and is featured prominently in artwork related to the website. This worked as a sort of promotion for the manga, and since then Yotsuba's innocence and childish charm have earned her the endearing love of all 4chan, such that despite Anonymous' affinity for lolis, posting Yotsuba porn is considered taboo, and her series is never to be bashed. However, the amount of artwork related to Yotsuba has declined since the early days since updates to the main page are rare, and that would normally be where most people get exposed to her.

Legend has it that newfags who were unaware of 4chan's history started asking /a/ who "404 Girl" was, though this origin is likely a myth. It is much more likely that 404 girl was used an alternate name for Yotsuba for trolling old /b/tards into outrage at the fact that people might not instantly recognize Yotsuba for who she is. As with Cockmongler being dubbed Grinman and Smiling Man, older /b/tards worry that newfags will mistake the troll term for the real identity of a beloved meme, thus diluting /b/'s true history. 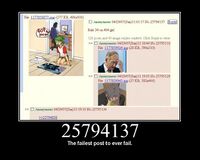 On 29th of April 2007 some idiot (or possibly a deliberate troll) posted in /b/ a request of Rule 34 on Yotsuba, 4chan's mascot and 404 error icon, calling her "404 girl". This was obviously the result of not LURKING MOAR and was unanimously dubbed "The failest post to ever fail", particularly since 4chan's affection for Yotsuba makes her one of the few characters of whom porn was always discouraged. Since then, a number of trollings using that very same request, in a copypasta manner, were seen on /b/. Since this is a relatively new meme, /b/tards that didn't LURK MOAR often fall for it and take the OP seriously. This results in often funny threads and fetches a few lulz.