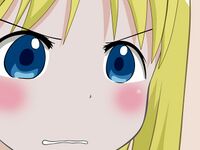 Gununu is a 2chan pose meme ported over the 4chan. Initially sparked by a picture of Ana Coppola from Ichigo Mashimaro with a displeased expression and furrowed eyebrows. For unknown reasons, this picture became prime shopping material, and several pictures were created by 2chan in the likeness of the original image using different anime characters. 4chan got wind of the meme and started to produce its own versions as well, some of which were adopted back by 2chan. Within days, hundreds of Gununus appeared on both boards, and new variations appear in droves every week, with many Anonymous thinking it'll only be a matter of time before every anime character ever will have a Gununu fashioned after him/her. This has lead to the minor meme "There's a Gununu for everything!", which is usually used in response to an outrageously unlikely Gununu (like Giovanni or Ghost Slide). The term "Gununu" itself is onomatopoeia, the transliteration of Ana Coppola's distinctive growl.