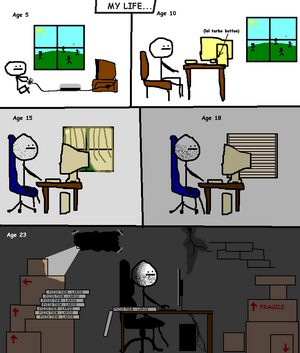 The users of /g/ tend to refer to themselves as /g/entlemen or /g/entoomen.

When a technical question is asked on any forum, and especially on 4chan, the standard reply to delete system32 is given. Doing so will, in fact, fix the user's problem, though it will also render his Windows installation useless. This reply is as standard as format c:.

delete system32 can also be used in conjunction with install gentoo, especially if it's used in order to exercise the user's freedoms.

The Logical Increments PC Buying Guide, also known as the Falcon guide, was a PC hardware buying guide created by a tripfag known as Th !e.FaLconO6. Even though the Logical Increments guide was created and updated by a single author, it was still a /g/ community guide. For each revision of the guide, Falcon created a new thread and only committed changes when there was a general consensus by the participants of each thread. The guide was not meant to be followed strictly; it was just a baseline to give buyers, especially new buyers, an idea of what was the best value for quality at the time. There was even a warning within the guide telling the readers to research all of the available options when purchasing a new computer or hardware.

Unfortunately, Falcon stopped making the guide in order to push the website he made. The website is completely full of referral links and no longer serves any purpose to the community.

When a user is told to format c, it's always meant with the best intentions. Formatting your C:\ partition on a computer with Windows install will remove all of the data on that drive/partition, but also destroy the operating system along with it. This, along with delete system32 and install gentoo, is a standard reply to any user with a technical issue.

The GNU/Linux rant is a piece of copypasta taken from a post Richard Stallman made on his blog. 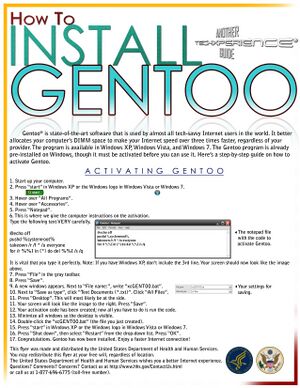 Install Gentoo, or just install gentoo, is a trolling phrase used on /g/, much like delete system32. When one asks a question about Windows, or has computer related problems, people will respond with "install gentoo," essentially telling the troubled user this will solve all of their problems - which is the opposite of what it will do, seeing as Gentoo is one of the harder Linux distros to install.

More recently, the meme can be use as a reply to fix any problem that exists, regardless of it being related to computers at all.

26666666 GET
August 5, 2012. "windows 7 master race" A picture of Christian Bale, as Patrick Bateman from American Psycho, being used as the Doubles Guy, with associated text. The thread was stickied, and the board's title was changed to "INSTALL WINDOWS 7" with a smaller subtext "RIGHT NOW". The /g/ userbase enjoyed the GET and the stickied thread was a hit.