A GIF that shows us what kind of trap it is. 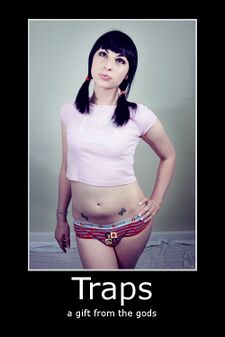 Traps are boys that look like girls. If a male passes for a female, in that he causes genuine confusion in his observers, he is a trap. The use of trap to describe passable cross-dressers and transgender people originated from the Fark meme "IT'S A TRAP," twisted and adapted to /b/'s purposes.

chanchan loves their traps, as does /b/.

It's a trap is a meme based on the line by Admiral Ackbar in Star Wars: Return of the Jedi; started on Fark around 2002, and spread to the rest of the Internet over a period of years, before ending up on /b/.

The original meme was transformed into a response to pictures of men who appear to be women; a "trap" set out to catch the unsuspecting observer into getting turned on by a picture of a man because he thought it was actually a woman.

"It's a trap" continued to degenerate into IT'S A TARP, keeping the same meaning. New photoshops depicting actual tarps were created, to go along with the modified meme.

The term reverse trap came about to mean the opposite of a trap: a girl who looks like a boy, a female cross-dresser or transgender person.